Obesity is defined as abnormal or excessive fat accumulation that poses a risk to health. Body mass index (BMI) is a measure of body fat based on height and weight that has historically been used to diagnose obesity. A BMI of 25.0 to 29.9 is considered overweight. A BMI of 30 or higher is considered obese.

However, body mass index isn’t an accurate measure of obesity for everyone. Muscular athletes, for example, might have a BMI that is considered obese even though they have little excess body fat. Body fat percentage may be a better indicator of risk of weight-related diseases. It distinguishes fat from muscle and calculates the percentage of body fat in the body. The American Council on Exercise provides the following ranges for adult body fat percentages:

Obesity is caused by several factors, such as diet, a lack of physical activity, and genetics. Some health conditions, like polycystic ovarian syndrome, Cushing’s syndrome and hypothyroidism, can increase your risk of becoming obese. These conditions affect the endocrine system, which is made up of glands that release hormones like insulin, cortisol, and thyroid hormone. Imbalances in these hormones can contribute to obesity.

Insulin regulates blood sugar levels and determines how the body stores glucose and fat. When someone is insulin resistant, the cells in the muscles, fat, and liver don’t respond well to insulin spikes and can’t absorb it properly. When this happens, the body produces more insulin to try to maintain healthy blood sugar levels, often resulting in weight gain.

Cortisol, often known as the stress hormone, regulates metabolism and the immune response. When the body makes too much cortisol, it can prompt overeating that leads to weight gain.

One of the functions of thyroid hormone is to control metabolism. When the body doesn’t produce enough thyroid hormone, called hypothyroidism, the body’s processes slow down which leads to weight gain.

According to the World Health Organization worldwide obesity has almost tripled since 1975. In 2016, more than 1.9 billion adults 18 and older were overweight and more than 650 million were obese. Obesity affects some people groups more than others. In the U.S., non-Hispanic Black adults (49.6%) have the highest age-adjusted prevalence of obesity. This is followed by Hispanic adults (44.8%), non-Hispanic white adults (42.2%), and non-Hispanic Asian adults (17.4%).

There aren’t any specific symptoms of being overweight and obese. Some signs you may notice include an increasing BMI, weight gain, unhealthy fat distribution and an increased waist circumference.

How Does Obesity Contribute to Autoimmune Conditions?

Research has found that obesity is a major contributor in the development of autoimmune conditions. Obesity leads to a breakdown of the body’s protective self-tolerance, the ability of the immune system to recognize self-produced antigens. This allows autoimmune conditions to develop. Obesity also creates a pro-inflammatory environment that contributes to disease progression and can reduce the effectiveness of some treatments, such as medication.

Research has found that there is an association between weight gain and increased inflammation. The reverse is also true: more inflammation can lead to more weight gain.

What Diseases is Obesity Linked To?

Studies have shown that obesity is linked to a higher risk of several autoimmune conditions. 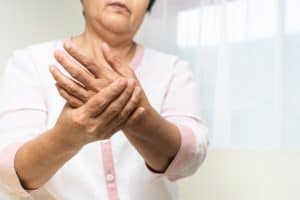 Rheumatoid arthritis (RA) is an autoimmune and inflammatory disease that primarily affects the joints. It is the most common inflammatory joint disease and affects more than 1.3 million Americans. RA is 2.5 times more common in women than men, and usually occurs between the ages of 20 and 50. If RA is left untreated, it can cause irreversible joint destruction that contributes to disability and impaired quality of life.

Studies have shown that obesity is associated with a higher risk for the occurrence of RA. One study found that a history of obesity was correlated with the likelihood of developing RA, more than obesity at incidence date. This means patients who were obese in the past but were not obese when they received an RA diagnosis, were more likely to develop the condition.

Two studies found that obese individuals had an increased risk of developing ACPA-negative RA, although one study only found this increase in women. Anti-citrullinated protein antibody-negative RA (ACPA-negative RA) is a type of RA that is defined by the absence of autoantibodies that are directed against citrullinated peptides and proteins. However, there was no biological explanation for the association.

Psoriasis is a chronic autoimmune condition that accelerates the growth cycle of skin cells. This causes red, raised, scaly patches on the skin, usually on the elbows, knees, scalp, and trunk. About 7.5 million people in the United States have psoriasis. It can occur in all age groups, but commonly occurs in people between the ages of 45 and 64.

Several studies have confirmed an association between obesity, psoriasis, and psoriatic arthritis. Compared with the general population, people with psoriasis have significantly higher odds of obesity. Researchers are unsure about the direction of this relationship. Some believe that obesity is a risk factor that predisposes the development of psoriasis and PsA. Others suggest that overweight and obesity are a consequence of psoriasis and PsA. Data suggests that the relationship goes both ways.

Psoriasis and PsA are thought to promote weight gain due to factors such as social isolation, depression, and overeating. But obesity is also thought to be an independent risk factor for psoriasis and PsA. One study shows that higher BMI and weight gain from young adulthood is a strong risk factor for psoriasis in younger and older women. Research has also shown that two adipokines that are enhanced in obese individuals are also found in patients with psoriasis and psoriatic arthritis.

Further research has shown that weight loss, either alone or with a combination of treatments, reduced the severity of psoriasis and psoriatic arthritis while also reducing the cardiovascular risk associated with both diseases. Additionally, obesity has been shown to reduce the effectiveness and safety of treatments for psoriasis and psoriatic arthritis. Some studies have shown that certain drugs for these conditions, such as methotrexate, have a higher toxicity in overweight and obese patients. 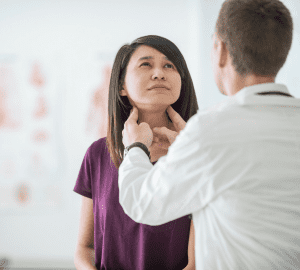 Hashimoto’s thyroiditis or Hashimoto’s disease is an autoimmune condition that can cause an underactive thyroid (hypothyroidism). The thyroid releases and controls hormones that control metabolism. When the thyroid is underactive, it does not produce enough hormones into the bloodstream, causing metabolism to slow down and may lead to weight gain.

The relationship between thyroid function and obesity is complex. Hypothyroidism has been associated with modest weight gain. People who are obese have an elevated serum thyroid-stimulating hormone (TSH), but this does not always mean the person has an underactive thyroid. Studies have suggested that people who are obese may be more likely to develop Hashimoto’s thyroiditis. The relationship isn’t clear, but one theory is that, since obesity is a chronic low-grade inflammation process, cytokines and other inflammatory markers are increased and affect the activity of thyroid cells.

One cohort study found that childhood weight gain and childhood overweightness led to a slightly increased risk of Hashimoto’s thyroiditis between the ages of 60 and 64, particularly in women.

Multiple sclerosis (MS) is an autoimmune condition that is caused by damage to myelin, a protective sheath around the nerve fibers in the brain and spinal cord. MS affects more than 1 million people in the U.S., and more than 2.3 million people worldwide. It usually occurs between the ages of 20 and 50.

The exact reason for a higher female-to-male risk in MS isn’t known. It may likely be caused by an interaction between childhood obesity and estrogen.

Not only can obesity increase the risk of developing MS, but it can also make the symptoms worse and accelerate the progression of the disease due to increased inflammation. People who are obese have higher levels of interleukin-6 and leptin, proteins that are produced by fat cells and promote inflammation. People who are obese also had lower levels of interleukin-13, an anti-inflammatory protein.

Obesity can reduce the effectiveness of MS treatments. A 2019 study found that, in children with relapsing-remitting MS, those who were overweight or obese had more relapses on first-line treatments and a higher rate of second-line treatment.

Type 1 diabetes, also known as insulin-dependent diabetes, is a form of diabetes in which the pancreas produces little or no insulin. It is usually diagnosed in children, teenagers, and young adults, but it can develop at any age. It affects nearly 1.6 million Americans, including about 187,000 children and adolescents.

Lupus is a chronic autoimmune disease that can cause pain and inflammation throughout the body. It can also affect different systems throughout the body, such as the skin, kidneys, joints, brain, and heart. Lupus affects about 1.5 million Americans, and at least 5 million people worldwide. It is most common among women of childbearing age.

When people refer to lupus, they are usually referring to systemic lupus erythematosus (SLE), but there are other forms of lupus, including cutaneous lupus, drug-induced lupus, and neonatal lupus. There is also a type of kidney disease called lupus nephritis that is a common complication in people with SLE.

Studies have shown the prevalence of obesity in patients with lupus ranges from 28% to 50% depending on measurement methods. One study conducted by the National Institute of Health (NIH) suggested that women with lupus are likely to be impacted by obesity at a lower BMI than the general population. This means that women with lupus who gained even a little bit of weight experienced negative effects on physical function, disability, and employment. 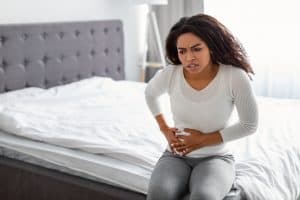 Irritable bowel disease refers to conditions that cause chronic inflammation in the intestines. It includes irritable bowel syndrome, ulcerative colitis, and Crohn’s disease. Approximately 3.1 million adults in the United States have been diagnosed with IBD. It affects men and women equally and can occur at any age, although it is most commonly diagnosed in people between the ages of 15 and 25.

Studies have shown that about 15% to 40% of adults with irritable bowel disease are obese. Premorbid obesity has also been associated with a risk of developing Crohn’s disease. Studies have suggested that the incidence of Crohn’s disease is highest when obesity is diagnosed before the age of 30.

Obesity is a serious medical condition that can have a negative impact on your health. If left untreated, it can contribute to the onset of various autoimmune conditions. Thankfully, obesity is highly treatable. By making healthier lifestyle choices, like exercising a few days a week and eating nutrient-dense foods, you can reduce your risk of developing obesity and autoimmune conditions.

If you are living with obesity, know that you are not alone. At PatientsLikeMe, there are thousands of members who are also living with obesity and learning different approaches to manage their health. Join the conversation today.