If you’ve been having unexplained symptoms like numbness, fatigue, or cognitive changes, you might suspect a neurological disease like multiple sclerosis. However, getting a definitive multiple sclerosis diagnosis can be difficult and can often take years. Because MS is often confused with other conditions like lupus and Lyme disease, your doctor will have to rule out any other possibilities first.

How Is Multiple Sclerosis Diagnosed?

To make a diagnosis of MS, your doctor must first find evidence of damage in at least two separate areas of the central nervous system (CNS). The two main areas of damage are found on the brain and spinal cord. Your doctor must also find evidence that the damage occurred at different points in time. This will help determine if you have MS or clinically isolated syndrome (CIS). Although CIS has characteristics of MS, it represents only one episode of symptoms and doesn’t mean you will develop MS.

In addition to finding evidence of damage to the CNS, your doctor will use several other methods to determine if you have MS. Some of these methods include taking a full medical history, a neurological exam, and other tests. 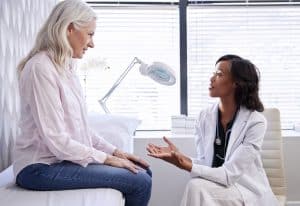 Your doctor will take a comprehensive look at your medical history to identify any past or present symptoms that might be caused by multiple sclerosis. Some symptoms of MS your doctor may look for include fatigue, walking difficulties, numbness or tingling, and weakness. Your doctor will ask you when these symptoms started and if they follow a pattern.

Your doctor will also ask about your lifestyle, medicine use, and family history. Although MS is not directly inherited from parent to child, there are genetic factors that can increase your risk of getting the disease.

Your doctor may also ask you about environmental exposures and your history of past illnesses.

A neurologic exam for MS looks at several different factors. The exam usually takes about an hour but can last up to two hours.

During the neurologic exam, your doctor may also test your short-term memory by asking you a series of cognitive questions. This can include asking you to memorize several objects for five minutes and then repeating them back. They may ask you to answer questions about current events, dates, and places.

What Tests are There to Diagnose MS?

There isn’t one test used to diagnosed MS. Instead, a neurologist and other healthcare providers will use several different tests to determine what is causing your symptoms, including blood tests, MRIs, and a lumbar puncture.

Although there isn’t a definitive blood test for MS, they can help rule out other conditions that are commonly mistaken for multiple sclerosis. These include conditions like Lyme disease, lupus, or thyroid disorders. A blood test can also rule out other causes for your symptoms, such as vitamin deficiencies. 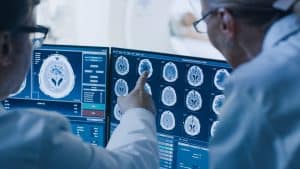 Magnetic resonance imaging (MRI) is a non-invasive test that produces detailed images of the body, including the brain and spinal cord. It’s the preferred imaging method used to help diagnose MS and monitor the progression of the disease.

Unlike CT scans or X-rays, MRIs don’t use radiation, so they are a safer method of imaging. Instead, they use magnetic fields and radio waves to measure the relative water content in tissues in the body.

Multiple sclerosis is caused by a loss of myelin, a protective fatty sheath that covers nerve fibers. This sheath repels water and when it’s damaged by MS, the fat is stripped away. This causes the sheath to hold more water and will appear on an MRI as a bright white or darkened spot depending on the type of scan.

MRIs can be used with or without contrast dye. This solution enhances the images by highlighting areas of the body that are being examined. The dye helps distinguish organs or blood vessels from surrounding tissue, which can help show abnormalities that doctors might not otherwise see.

Also known as a spinal tap, a lumbar puncture involves removing and analyzing cerebrospinal fluid (CSF). This fluid surrounds the brain and spinal cord in the skull and backbone. CSF acts as a cushion and shock absorber. It also circulates nutrients and chemicals that are filtered from the blood and removes waste products from the brain. When MS damages myelin, it causes certain types of proteins to be released into the spinal fluid.

The CSF is analyzed to look for the following:

An evoked potentials test measures how long it takes for sensory signals like sight, sound or touch, to reach the brain. This test can show problems that occur along the nerve pathways that are too subtle to be seen in a neurologic exam. These problems may also be undetectable on an MRI.

A 2016 study found that evoked potentials tests can complement the results of other tests and are the only way to assess how well myelin, axon, and synapses are working in specific sensorimotor pathways.

There are three primary types of evoked potentials tests used in diagnosing MS:

Auditory evoked potentials are a record of the time it takes auditory system nerves to respond to sound and electrical stimulation. An audiologist can determine if there is a block along the neural pathways that lead to the brain. Electrodes are placed on the head and connected to a computer that records nerve responses. Sounds are delivered through earphones while the patient is resting quietly. If there is a detectable nerve response, the patient passes the test.

A visual evoked potential measures the amount of time it takes for a visual stimulus to travel from the eye to the occipital cortex. This is the area of the brain that is primarily responsible for visual processing. During the test, a checkerboard pattern will flash on a computer screen. Electrodes placed on the back of your head will record the responses on an electroencephalogram (EEG), a test that detects abnormalities in your brain waves.

During a median nerve sensory evoked potentials test, the median nerve located near your wrist will be stimulated. The median nerve is a sensory and motor nerve that provides movement functions to the wrist, hand, and forearm. It also sends sensations of touch, pain, and temperature from the lower arm and hand to the brain. Electrodes are placed on the scalp, neck, chest, and wrists, and mild electrical stimulus is sent through the electrodes. The electrodes on the scale measure the time it takes for the current to travel along the nerves to the brain.

What Is The Criteria For An MS Diagnosis?

An MS diagnosis is usually made using the McDonald criteria. Clinicians use this tool to ensure they are making an accurate diagnosis as early as possible. An international panel of MS experts originally published the criteria in 2001, and it has been revised several times since then. The most recent revisions were made in 2017. Anyone diagnosed with previous versions of the McDonald criteria will also meet the 2017 criteria.

The McDonald criteria note that MS is best diagnosed by a clinician who has experience with multiple sclerosis and is well-versed in imaging and other tests used to find a diagnosis. The criteria also emphasizes that there cannot be a better explanation for a patient’s symptoms.

Some of the changes in the 2017 revision include:

The panel recommends the brain MRI be obtained during the diagnostic process while a spinal MRI can wait to be obtained until additional data is needed to confirm the diagnosis. They also recommend that the MS course be identified as active or inactive, progressive, type and course. The disease course should be re-evaluated periodically as the disease progresses.

Studies have shown that misdiagnosis is common. If the patient doesn’t have a typical clinically isolated syndrome or belongs to a population in which MS is less common, doctors should use additional testing to gather supporting evidence for an MS diagnosis.

A differential diagnosis looks at other conditions that could possibly be causing your symptoms. These are known as MS mimics. There are a few categories that MS mimics can be divided into.

MS is an autoimmune disease and shares symptoms with several other autoimmune conditions. These include:

Lupus is a chronic autoimmune disease that most commonly affects the skin, joints, and internal organs like the kidneys and heart. When people refer to lupus, they are usually referring to systemic lupus erythematosus, which is the most common type. Symptoms of lupus include migraines, changes in cognitive function, numbness, tingling, fatigue, and muscle pain.

Sarcoidosis is a rare chronic condition that is categorized by growth of tiny, grain-like lumps called granulomas. These can affect any organ in your body, but most commonly affects the lungs and lymph nodes. Symptoms of sarcoidosis include inflammation and pain in the eyes, blurred vision, shortness of breath, fatigue, and weight loss.

Sjogren’s Syndrome is an autoimmune disease that affects moisture-producing glands, such as those that produce tears and saliva. Symptoms include dry mouth and eyes, trouble speaking or swallowing, joint pain, numbness, and fatigue.

MS affects the brain and spinal cord and can share symptoms with other conditions that affect the central nervous system, including:

Lyme disease is a bacterial infection that is caused by the bite of an infected deer tick. The first symptoms of Lyme disease include rash, fever, fatigue, and headache. If the infection is not treated early, it can spread to the heart, joints, and nervous system. 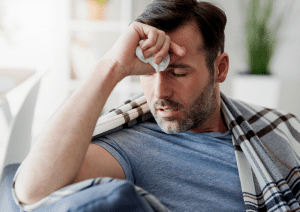 Human T-cell lymphotropic virus (HTLV) is a rare retroviral infection that affects the T cells, a type of white blood cell. Although it generally doesn’t cause any signs or symptoms, some people may experience fatigue, nausea and vomiting, stiff muscles or muscle spasms, and progressive weakness.

Syphilis is a sexually-transmitted infection that can cause serious health issues if left untreated. The infection can spread to the brain and nervous system, causing symptoms such as severe headache, numbness, and difficulty coordinating muscle movements.

Although MS isn’t a genetic disorder, it shares symptoms with some genetic conditions, including:

Leukodystrophies are a group of more than 50 rare, genetic disorders that affect the white matter in the brain and spinal cord. They target myelin and lead to a progressive loss of mental and physical function. Symptoms include loss of balance, cognitive changes, problems with balance, movement, and coordination, and vision changes.

Hereditary cerebellar degeneration refers to a group of conditions in which the cerebellar cells become damaged and progressively weakened in the cerebellum, the area of the brain that controls coordination and balance. Symptoms include a back-and-forth tremor in the trunk of the body, uncoordinated arm and leg movements, and slow and slurred speech.

If you think you might have MS, it’s important to get a diagnosis as early as possible to begin treatment and prevent permanent neurologic damage.

Getting a multiple sclerosis diagnosis can be scary, especially during the first episode and weeks following. It’s normal to feel confused and overwhelmed with all the information there is to learn and modifications to your lifestyle. If you’re having trouble coming to terms with your multiple sclerosis diagnosis or think you may have been misdiagnosed, now that you’re not alone. At PatientsLikeMe, there are over 75,000 members who are also living with multiple sclerosis. Join them today to learn about how they were diagnosed and how they are coping with their condition.