If you’ve been living with multiple sclerosis, you might have noticed that you don’t feel as sharp as usual. Maybe you’re having trouble remembering information or concentrating on certain tasks. You may even feel like your brain is constantly in a fog. If any of this sounds familiar, you’re not alone.

Cognitive changes are often one of the first signs of multiple sclerosis. They can occur before an official diagnosis. But these changes can occur during any course of the disease, including clinically isolated syndrome. They can also appear in radiologically isolated syndrome and may appear before structural abnormalities are found on an MRI. However, studies have shown the prevalence and severity of cognitive impairment appear to be greatest in patients with secondary progressive MS and primary progressive MS.

Here are some things to look out for if you are experiencing cognitive impairment in MS.

Cognition affects every aspect of life, from managing your relationships to your ability to do your job, to how you perceive the world around you.

What Causes Cognitive Impairment in MS?

MS is caused by inflammatory demyelination, or loss of myelin. Myelin is a sheath of fatty tissue that protects nerve cells, including those in the brain and spinal cord. When you have MS, the immune system attacks healthy cells in myelin. These attacks damage the myelin sheath and leave lesions that interrupt signals from the brain to the rest of the body. Cognitive changes in MS are usually associated with the amount and location of these lesions in the brain. 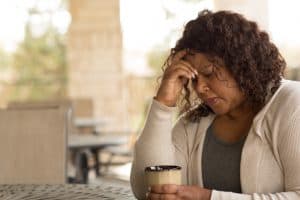 MS fatigue is another major factor that can affect cognitive function. Fatigue in MS often involves a lack of motivation and an overall feeling of exhaustion. The exact cause of fatigue in MS isn’t well understood. Researchers believe that MS might cause a reduced monoaminergic release in the central nervous system which affects attention, mood, and motivation. Monoamines are neurotransmitters that modulate those functions and are commonly reduced in MS patients with fatigue.

Certain medications can also cause cognitive changes. These changes are usually temporary. Steroid medications, muscle relaxants, and certain antidepressants can affect thinking. If your cognitive symptoms are a side effect of medication, your doctor will likely suggest changes to your treatment plan.

Cognitive changes may occur by themselves or in combination with other factors. They can also occur as part of normal aging or may be caused by disease or injury. Cognitive function may also be temporarily affected by stress, sleep disturbances, or nutrition. Because it’s not always clear what is causing cognitive impairments, it is important to address them as they arise and speak with your doctor about the proper steps to manage them.

Which Cognitive Functions Does MS Affect?

Cognitive impairment in MS can range from mild to severe. People with MS experience changes in one or two areas of cognitive functioning, while other areas function normally. Although some people will experience more challenging cognitive changes.

Some of the cognitive functions that are commonly affected by MS include:

Trouble with memory is the most frequently reported cognitive change for people with MS. This change is usually limited to recalling recent events, such as a phone number or conversation from the same day. People with MS are usually still able to remember events that happened in the past.

Several studies have suggested that most people with MS can adequately learn and store information but may have trouble recalling it quickly and effectively when they need it. On the other hand, one researcher found that some people with MS take longer to learn new information. On verbal list-learning tests, people with MS needed more trials to learn the task than a control group of people without MS. After controlling for the differences in how the information was acquired, people with MS were able to recall the verbal material at the same level as the control group. This suggests that the MS group did not have memory impairments as far as retrieving information, but that they did not learn the material completely the first time.

Patients with multiple sclerosis often have a significantly slower speed of information processing compared to people without MS. This means it takes a little longer than usual to process something you are hearing, reading, or experiencing through the senses. One study found that people with MS performed as well as control subjects on a specialized memory task, but they did so significantly slower than the controls.

Although MS can cause speech changes such as slowed speech, verbal fluency refers to information retrieval from memory. Someone with MS may have the feeling of a word or phrase being right on the tip of their tongue, but they are unable to think of it. 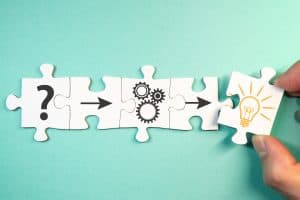 Abstract reasoning, or abstract thinking, refers to the ability to understand and think about objects or ideas that are not physically present. It involves analyzing information, detecting patterns, and establishing relationships between events, ideas, or objects. This can include recognizing what shape comes next in a sequence, or understanding that a heart symbolizes love.  Some people with MS may feel like their judgment has been affected and they are unable to solve a problem quickly or efficiently.

One study found that cognitive and psychological difficulties with MS contributed more to withdrawal from the workplace than physical disability. At the beginning of their diagnosis, 81.5% of MS patients were employed but, seven years after their diagnosis, only 54.4% of MS patients remained employed. Among those who were not working seven years after diagnosis, 72.7% were cognitively impaired, while 27.3% were unimpaired at the start.

Recognizing the signs of cognitive impairment early is critical because these changes can have a significant impact on a person’s quality of life. These changes are often first noticed either by the individual or by a family member, colleague, or friend.

You or someone around you might notice that you are starting to have trouble:

Although evidence supports cognitive screening and evaluation for people with multiple sclerosis, it is rare in the MS diagnosis process. A 2012 Consortium of Multiple Sclerosis Centers member survey found that 52% of healthcare providers who worked with MS patients said they didn’t perform any kind of cognitive function screening. Meanwhile, 19% said they asked patients about any cognitive issues but did not do a formal screening.

The group also recommends that healthcare providers screen patients with MS for cognitive dysfunction at least once a year. These screenings should be completed more often if the patient shows new symptoms or changes in cognitive function.

If your healthcare provider does not ask about cognitive changes during your visit, be sure to mention them. If you’re worried you won’t remember to ask, you can ask a friend or family member to come with you so they can remind you.

Screening for Cognitive Impairment in MS

There is no single test that measures cognitive impairment in MS, but there are screening tools available. One screening tool that is commonly used is the Paced Auditory Serial Addition Test (PASAT). This test assesses auditory information processing speed and flexibility, as well as calculation ability. It takes about 10 to 15 minutes to complete and is presented on a CD or played on a digital device.

A formal neuropsychological exam can also help measure cognitive changes. This exam uses multiple tests to measure attention, memory, and other cognitive processes. Some parts of the exam may be self-reports that patients complete themselves. Other parts of the exam will be administered by a trained neuropsychologist. These tests are standardized, so they are administered and scored the same way for all patients.

If you are experiencing cognitive impairment in MS, there are some steps you can take to manage these changes.

Be Forthcoming About Cognitive Changes

First, it is important to be forthcoming about any cognitive changes you are experiencing. If it isn’t a routine part of your doctor’s visits, you might want to ask if it can be added as a topic of discussion. It may be helpful to write down when you experience cognitive changes. Does it happen after taking a certain medication, or at certain times of day? What cognitive processes do you tend to struggle with the most? Keeping track of these changes can be helpful for developing a treatment plan and coming up with strategies to cope.

Make sure you also talk to your friends and family members about any cognitive changes you are experiencing. They may notice these changes on their own, but they may not be aware that they are related to your MS. If your loved ones are aware of the different areas you are having trouble in, they may be able to help you. 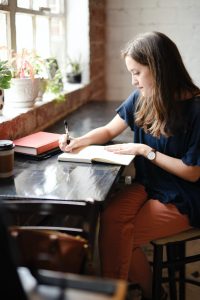 If memory is one of the areas you are struggling with, it can be helpful to get organized. Decide if you want to use a paper-based or technology-based system for keeping track of appointments, taking notes, and setting reminders. If you are using a notebook to keep track of things, you may want to use a small one that you can carry with you everywhere you go or one that you can keep in a place you will see all the time, like the kitchen countertop. You can also use your phone to keep track of information.

It helps to set a particular place for storing items you use often, like your car keys. You can put a hook next to the door, so you always see them when you are leaving the house. If you live with other people, encourage them to return items to their proper spots when they’re done with them.

Find the Support You Need

If you are living with MS and are struggling with cognitive changes, you are not alone. At PatientsLikeMe, there are over 75,000 members who are also living with MS. Join the conversation to connect with them and learn how they are managing their MS symptoms.