If you’re living with multiple sclerosis, you probably have a lot of questions about your diagnosis. You might be wondering how you developed the disease and what your outlook is. While the course of the disease will vary from person to person, an exact cause has yet to be identified. Scientists have found that a combination of factors often causes multiple sclerosis.

What happens when you have MS?

Multiple sclerosis is an autoimmune condition, which means the body’s immune system mistakenly attacks healthy cells rather than protecting them. It is unclear why the immune system does this or what prevents it from being able to identify healthy cells versus invaders. Because the autoimmune response is unknown, there aren’t any absolute cures for autoimmune disorders.

When it comes to MS, the immune system attacks healthy cells in the myelin, the protective sheath that surrounds nerves in the brain and spinal cord. When the myelin sheath is damaged, nerve signals from the brain to other parts of the body are interrupted. This damage can cause symptoms such as muscle spasms, stiffness, and weakness, or lack of coordination.

What are some of the causes of MS?

There are several factors that researchers believe can cause multiple sclerosis. 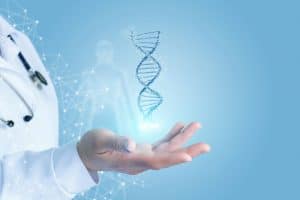 One gene in particular that has the strongest link to multiple sclerosis is HLA-DRB1*15:01.

The HLA-DRB1 gene belongs to a family of genes called the human leukocyte antigen (HLA) complex. These genes help the immune system distinguish the body’s own proteins from proteins made by foreign invaders like viruses and bacteria.

HLA-DRB1-*15:01 is an allele of the HLA-DRB1 gene. An allele is a version of a gene, and there can be hundreds of different versions of a particular gene. These variations allow the body’s immune system to react to a variety of foreign proteins. However, HLA-DRB1*15:01 has been found in individuals who do not have multiple sclerosis, which means there may be other factors at play that contribute to the development of the disease.

The HLA-DR15 gene variant, which contains the DRB1*1501 gene, is responsible for up to 60% of genetic risk for multiple sclerosis. If carriers of this gene are also infected with Epstein-Barr virus and have Pfeffer’s disease (also known as glandular fever or infectious mononucleosis), the risk of developing MS increases 15-fold.

Another gene that has been found to be linked to the development of multiple sclerosis is IL7R. This gene provides instructions for making a protein called interleukin receptor alpha chain. Interleukins are groups of naturally occurring proteins that mediate communication between cells. They regulate cell growth, differentiation, and motility, and are involved in stimulating an immune response.  IL7R is also responsible for maintaining and proliferating T cells, which help protect the body from infection.

There are several environmental factors that have been concluded to increase the risk of and may cause multiple sclerosis. However, there is no single risk factor that can definitively determine who gets MS and who doesn’t.

Vitamin D helps the body absorb different nutrients, like calcium, that are needed to keep bones, muscles, and teeth healthy. There is a growing body of evidence that suggests vitamin D plays a role in the development of MS, although the connection isn’t entirely clear.  Research suggests that the connection between vitamin D and MS could be tied to the positive effects that vitamin D has on the immune system. It helps promote immune response and has anti-inflammatory and immunoregulatory properties and enhances the function of immune cells like T cells and macrophages.

Low vitamin D levels in the blood have been identified as a risk factor, and the level of serum vitamin D also modifies disease activity in MS patients.

People who get more sun exposure and have more vitamin D in their diet have a lower risk of MS. Higher levels of vitamin D are also associated with reduced clinical activity in established MS, including a decreased risk of relapse and a reduction in disease activity in the brain. Vitamin D can also help lessen the frequency and severity of symptoms and improve quality of life.

Vitamin D supplementation may reduce the risk of MS in the general population, and research has shown that maintaining adequate levels of vitamin D can have a protective effect against the disease. It’s important to know that large doses of vitamin D over an extended period of time can result in toxicity, so consult with your doctor if you are planning to add a vitamin D supplement.

MS occurs more frequently in areas that are farther from the equator. People who live in higher geographical latitudes receive lower levels of sunlight, which is the best source of vitamin D. Countries such as Scotland and Scandinavia, as well as northern Europe, have higher incidences of multiple sclerosis. In the United States, states in the eastern region had the highest prevalence of MS, while states in the west region had the lowest prevalence.

Migrant studies have shown that people born in a region with a high risk of MS who move to a region with a lower risk before the age of 15 have a lower-than-expected prevalence of MS. People who move from an area of low risk to an area of higher risk tend to retain the lower risk of their place of origin. These studies suggest that there may be exposure to environmental agents before puberty that can cause someone to develop MS later on.

Studies have shown that smoking increases the risk of developing MS. Smoking can also cause multiple sclerosis to progress more rapidly and increase the severity of symptoms.

Research has shown that smokers produce antibodies that fight some medications used in MS treatment. , Avonex, Rebif, and Plegridy, are anti-inflammatory drugs that are used to treat MS. They are interferon beta-1a (IFNβ-1A) medications known as immunomodulators that decrease inflammation and prevent nerve damage that causes symptoms of MS. Smokers have an increased risk of making antibodies to IFNβ-1A, which can make these medications less effective.

It’s evident that smoking reduces the function of the immune system, making patients with MS more susceptible to illness and infection, and increasing the likelihood of developing other autoimmune diseases.  For people with MS who smoke, quitting smoking has been associated with slower disability progression. Those who quit smoking after being diagnosed with multiple sclerosis may be able to delay the need for assistive devices for walking. People who quit smoking also delay the development of secondary progressive multiple sclerosis by 8 years compared to current smokers. 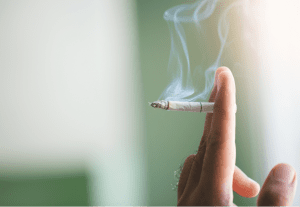 Part of the association between cigarette smoking and MS is due to the general negative health effects of smoking. Cigarette smoke contains thousands of chemical compounds, many of which are toxic to neurons and can have a negative influence on immune function. People who have smoked and those who have been exposed to secondhand smoke are at higher risk of developing MS than those who have never smoked. Compared to non-smokers, smokers are almost two times more likely to be diagnosed with MS. Smokers also progress to secondary progressive MS at a faster rate than non-smokers and have a greater risk of increasing disability. In people who have experienced one episode of neurologic symptoms, known as a clinically isolated syndrome, and who smoke cigarettes, there is a higher risk of a second attack and conversion to clinically definite MS.

While obesity alone doesn’t seem to cause multiple sclerosis, scientists believe obesity may worsen MS in people who already have the disease. But obesity can also contribute to MS in a few different ways:

Infections, combined with other risk factors, may cause multiple sclerosis. Researchers have investigated Epstein-Barr virus (EBV), also known as human herpesvirus 4, is involved in MS. EBV is one of the most common human viruses and most people will get infected with it at some point in their lives, usually in childhood. EBV can cause infectious mononucleosis (mono), also known as the “kissing disease,” and is commonly spread through bodily fluids such as saliva. EBV can weaken the immune system, making it more difficult for the body to fight off other infections.

Studies have found that antibodies to EBV were significantly higher in people who eventually developed MS than in control samples of people who did not get the disease. This leads experts to believe that prior EBV infection may be a cause of MS. The risk of MS also increases significantly following an EBV infection.

Another study examined whether viral infections during a person’s teenage years could trigger MS in adulthood. The study, which followed nearly 2.5 million people in Sweden, examined data on hospital-diagnosed infectious mononucleosis in children up to 10 years old and adolescents aged 11 to 19. The researchers compared that data to MS diagnoses later in life. The study included siblings to understand the impact of family life and genetics.

During the study period, 5,867 people received an MS diagnosis beginning at 20 years of age. Children who had hospital-diagnosed infectious mononucleosis had a higher risk of developing MS, but teenagers showed the greatest risk of getting an MS diagnosis.

Human herpesvirus 6 (HHV-6) may also be involved in MS, specifically in triggering relapses. HHV6 is linked to roseola, a common viral infection that causes a rose-colored rash. A team of researchers in Spain found that HHV-6 antibodies reached their highest levels in people with multiple sclerosis two weeks before they had a relapse. The team suggested that tracking HHV-6 antibodies could help predict the clinical course of multiple sclerosis.

There are several theories that have been suggested as possible causes for MS, but many of them do not have enough supporting evidence. Some of these theories include:

There is still a lot of research being done to determine what causes or contributes to MS. While it isn’t currently possible to predict who will get the disease and who won’t, you know what to look out for if you think you are at risk.  If you have been diagnosed with MS, know that you’re not alone. At PatientsLikeMe, there are nearly 75,000 members who are living with MS and are supporting one another as they learn how to manage their condition. Join the conversation to get the support you need.