In these days of Facebook and Twitter, the media is abuzz with news of “over sharing” of sensitive, personal or trivial information – everything from your current location to what you were up to over the weekend.  Members on our site may choose to share some of this, but what about some of the less trivial things in life, like your health information?  Is there such a thing as “over sharing?”  And what about your old “networks,” the ones that are now referred to as your “In Real Life” (IRL) relationships?  How much sharing do you do with them?

For anyone with a life-changing condition, the choices you make in telling (or not telling) others about your diagnosis are a big deal.  There can be both benefits and risks to openly discussing your condition, whether it’s on a website, at work or amongst friends.  To find out more, we conducted a poll amongst 3,858 patients with 10 different conditions, including ALS/PLS/PMA (N=429), Multiple Sclerosis (N=436), Parkinson’s Disease (N=580), HIV (N=137), Mood Conditions (N=513), Fibromyalgia (N=1,031), Chronic Fatigue Syndrome / ME (N=129), Epilepsy (N=347), and Organ Transplants (N=256).

How openly have you shared your diagnosis with various people in your life?  This was the focus of the poll.  We asked you to answer this question across seven different networks, including your immediate family, extended family, neighbors, work/school peers, friends from childhood, current circle of friends, and friends/followers on social networking sites such as Facebook and Twitter.  We then asked you how many of those people you’ve told (i.e., all of them, most of them, about half of them, a few of them, none of them, or does not apply to me). 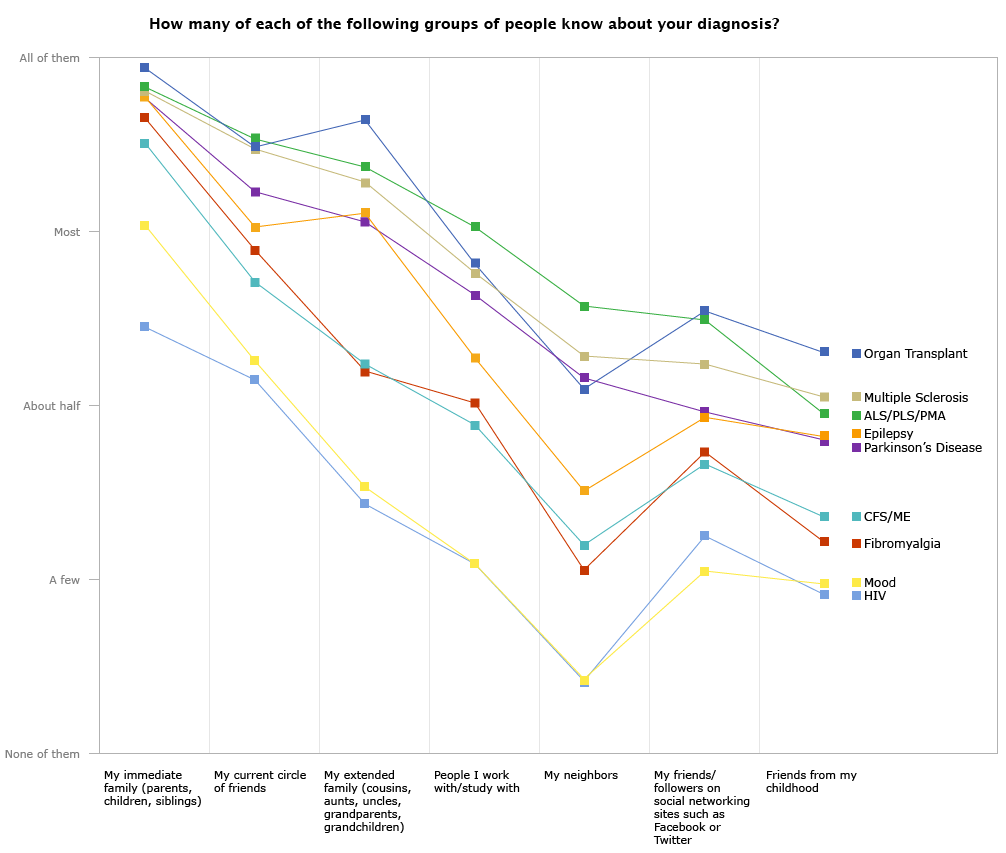 The figure above shows you the response from almost 4,000 patients and gives you a sense of the “shape” of sharing in each disease.  Each column represents your personal network (e.g., family); the colorful lines represent your condition (e.g., ALS); and the height of the line represents the mean degree of sharing within a network (e.g., all of them).  So, do you see the lines close to the bottom of the chart?  Those indicate that very few people in those patients’ networks have been told about their diagnosis.

So, what did we find?  First, the most obvious finding is that you are most likely to share your diagnosis with all of your close family (81%), followed by your current circle of friends (51%) and extended family (43%). From there, you’d most likely tell your peers from work or school (29%), your “friends” or followers on social networks (22%), your neighbors (19%), and finally your friends from childhood (16%).  When it comes to your childhood friends and neighbors, the results reveal that you are much more selective about who you choose to tell.  In these categories, the majority (52%) of you indicate that you have told either “a few of them” or “none of them.”

Two conditions (HIV and Mood Conditions) are the least well known among all networks.  For instance, overall results suggest that within a patient’s immediate family, 81% say “all of them” know about the diagnosis.  However, in HIV, this figure is only 50%, and in Mood it’s 56%.  The effect is even more pronounced with weaker social ties, such as neighbors; overall, 19% of respondents said that all of their neighbors knew their diagnosis; the same number was 4% in HIV and only 2% in Mood.

We didn’t only analyze the results by condition.  What about age?  We found that older patients were more likely to have told their neighbors or people at work/ school than younger patients.

Perhaps the richest data (still to be analyzed) is the open-text responses that we received about some of the positive and negative experiences you’ve had as a result of sharing their diagnosis. A positive example from a patient with ALS read:

“I was devastated and overwhelmed initially, but after reading reports of other ALS patients on PatientsLikeMe, I realized I was not in this alone and their comments were so encouraging.  They encouraged me to share with others and share the triumphs/and bad days.”

A patient with HIV shared some of the risks behind making the choice to be open:

“There is still a massive stigma that goes with HIV. Disclosing can be incredibly difficult when it comes to who to tell and when. Too many still have major misconceptions about the disease and what it means for both the person that has the disease and the people around them.”

Thank you to everyone who took a few minutes to take our poll.  Tomorrow, we’re going to look at what you said about how PatientsLikeMe has affected your openness.

2 thoughts on “Patient Choices: The Shape of Sharing”