March is Endometriosis Awareness Month, which means it’s a good time to brush up on this common women’s health problem.  For example, did you know that endometriosis gets its name from endometrium (en-doh-MEE-tree-um), the tissue that lines the uterus?  Or that this often painful condition occurs when that tissue begins to grow in other places, such as on the ovaries, fallopian tubes and pelvic cavity lining?  In rare cases, endometrial tissue has even been found in places like the lungs and brain. 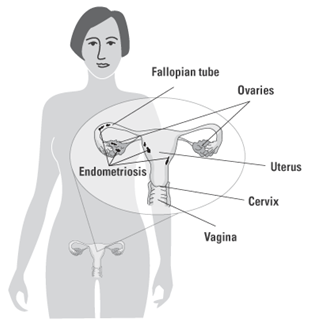 More than five million women in the US have endometriosis.  It’s most common in women in their 30s and 40s, but it can occur in any teen or woman who has menstrual periods.  Symptoms include painful menstrual cramps, chronic lower back or pelvic pain, pain during or after sex, intestinal pain, infertility and painful bowel movements and/or urination during menstrual periods.  Interestingly, pain levels don’t align with the amount of endometriosis, though.  Some women have severe pain with only a few small growths.

The cause of endometriosis is unknown, but research shows a link between endometriosis and several other chronic conditions, including multiple sclerosis, fibromyalgia, chronic fatigue syndrome and lupus.  Endometriosis also appears to run in families, suggesting that it may be carried in the genes or that some families have traits that make them more likely to get it.  In other mysteries, scientists have not yet pinpointed how endometrial tissue travels through the body, although there are several theories.

Despite the unknowns, there are many things you can learn from the 400+ women who report endometriosis at PatientsLikeMe.  How are they coping?  Some commonly reported treatments include a conventional hysterectomy, laparoscopic hysterectomy, (a birth control pill that produces four periods a year), Mirena (an IUD contraceptive device) and the prescription drug Lepron Depot.  Click on each treatment to see how others evaluate the effectiveness, side effects, cost and more.  And if you yourself have endometriosis, share your experiences and connect other women like you today.

3 thoughts on “What Do You Know About Endometriosis?”