Multiple sclerosis is a chronic autoimmune condition that impacts the central nervous system, including the brain and spinal cord. It affects nearly one million people in the United States and more than 2.3 million people worldwide. MS is a progressive disease, meaning it can get worse over time without treatment. However, treatment can’t always slow the progression of the disease. There are four types of multiple sclerosis: clinically isolated syndrome, relapsing-remitting MS, primary progressive MS, and secondary progressive MS.

Common symptoms of MS that can occur at any stage include numbness and tingling, muscle spasms, loss of balance, and spasticity. Other symptoms that can occur with the condition include fatigue, cognitive changes, and weakness.

Multiple sclerosis is a complex and unpredictable disease. Because there is no way to know for certain how someone’s MS will progress, there is no set timeline for how long it will take to move from one stage to the next.

Clinically isolated syndrome (CIS) is one type of multiple sclerosis. With CIS, the first episode of neurologic symptoms lasts at least 24 hours. These include:

CIS is caused by inflammation or demyelination, which is the loss of myelin. Myelin is a protective sheath of fatty tissue that protects the nerve cells, including those in the brain and spinal cord. Damage to the myelin sheath interrupts nerve signals from the brain to other parts of the body. Inflammation causes lesions to form and interrupts signals from the brain to the rest of the body. Symptoms of CIS vary depending on the location of the lesions.

The symptoms of CIS are not associated with fever, infection, or other illnesses. CIS has characteristics of multiple sclerosis, but a single episode doesn’t necessarily mean you have MS. CIS can either represent the onset of MS or it may be an isolated episode.

To make a diagnosis of multiple sclerosis, a neurologist will look for evidence of two or more areas of damaged myelin in the brain and spinal cord. The damage must have occurred at different points of time to distinguish CIS from MS.

There isn’t a single test that can determine your risk of developing MS after experiencing CIS. Instead, your doctor will look at several risk factors, including:

CIS is two to three times more common in women than men. While it can develop at any age, 70% of people diagnosed with CIS are between the ages of 20 and 40.

CIS episodes are usually mild and go away on their own. If you experience symptoms that are more severe or frequent, your doctor may prescribe high dose steroids. If you have an elevated risk of developing MS, your doctor may give you the choice to take disease-modifying drugs.

Relapsing-remitting multiple sclerosis is the most common type of MS. About 85% of MS patients have RRMS. It’s defined by inflammatory attacks on myelin and nerve fibers. The exact cause of RRMS is currently unknown, but experts believe a combination of genetic and environmental factors may play a role in the development of RRMS and other forms of MS. 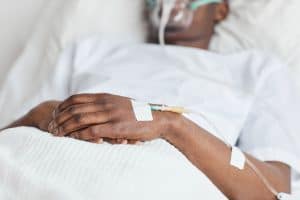 With RRMS, patients have relapses that last 24 hours or longer followed by periods of stability. During a relapse, you may have symptoms you’ve experienced before or new ones. Past symptoms may appear in different parts of the body than you’re used to. Every relapse is different. It isn’t possible to know when they will happen or how often. People with RRMS usually have one or two relapses a year.

The symptoms of a relapse usually come on suddenly. A relapse can range from mild to severe and can last anywhere from a few hours to a few months. Most relapses can be self-managed at home, but some may need hospital treatment.

A relapse is followed by a remission or period of recovery. During remission, symptoms may disappear completely while others may continue and become permanent. There is no obvious progression of MS during a relapse.

RRMS can be classified with four modifiers:

The symptoms of RRMS vary and can include:

RRMS is two to three times more common in women than men. It can develop at any age but is usually diagnosed when someone is in their 20s or 30s. While there is no specific test for RRMS and an MRI or spinal fluid test cannot distinguish RRMS from other types, people with RRMS usually develop more new brain lesions than people with progressive forms of MS.

The criteria for diagnosing RRMS requires evidence of at least two separate areas of damage in the central nervous system that occurred at different points in time. Your doctor will also need to rule out other conditions that could be causing your symptoms. Conditions that are commonly mistaken for MS include Lyme disease, lupus, and fibromyalgia.

It is best to start treatment for RRMS as soon as possible. Most people can manage RRMS with medication, such as physical or occupational therapy, or lifestyle changes. Medications for RRMS include disease-modifying drugs (DMDs) such as beta interferons and dimethyl fumarate, or symptom management drugs like meclizine and tizanidine.

Benign MS is the mildest type of multiple sclerosis. It is often considered a variation of RRMS. It can appear as an extended period of remission with few or no symptoms. About 10% of people with MS have a benign disease course.

Neurologists may use the Expanded Disability Status Scale (EDSS) to recognize benign MS. The EDSS measures the extent of physical impairment and ranges from 0 to 10. The standard criterion for benign MS is below 3 on the EDSS. This means there is no evidence of worsening body functions and no increase in disease activity.

People with MS receive a diagnosis of benign MS 15 years or more after the initial MS diagnosis. Long-term follow-up of people with benign MS shows that some who didn’t take MS medications eventually became disabled.

Primary progressive MS (PPMS) is a severe type of multiple sclerosis. It’s characterized by worsening neurologic function from the onset of symptoms without early relapses or remissions. There are four forms of PPMS:

The symptoms of PPMS mainly affect the nerves in the spinal cord but can affect everyone differently. Symptoms include:

Other symptoms may include:

Ten to 15% of people with multiple sclerosis have PPMS. It affects women and men equally. People with PPMS are usually diagnosed in their mid to late 30s. Studies have suggested that PPMS may take two to three years longer than RRMS to diagnose. People with PPMS may also need more help with daily activities.

Although there is no cure for PPMS, it is not fatal. Treatment, like medications and occupational therapy, are used to manage symptoms and improve quality of life. In 2017 the Food and Drug Administration approved a disease-modifying drug known as Ocrevus as the first drug to treat PPPMS. Ocrevus reduces disability progression in people with PPMS compared to a placebo. It is also associated with lower rates of MRI progression.

The transition from relapsing-remitting MS to progressive MS is gradual. It is possible to be diagnosed with SPMS from the beginning, as mild relapses early can be overlooked.

Like other types of multiple sclerosis, there is no single test to diagnose SPMS. Once there is a diagnosis of RRMS, your doctor will continue to observe your symptoms over a period of time to determine if they have progressed to SPMS.

It is not clear why people progress from RRMS to SPMS and others don’t. Some researchers believe it is because of a nerve injury that happened early in the disease. This injury may cause the nerve fibers to disappear, triggering the progression of RRMS to SPMS. 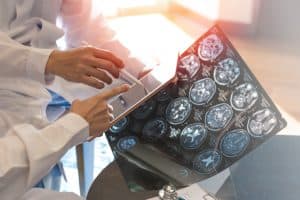 While it is possible to delay disease progression, it cannot be stopped completely. Disease-modifying therapies can help decrease inflammation, which reduces the severity and frequency of MS attacks. Other medications may address specific symptoms such as depression or muscle spasms. People with SPMS can continue to take the same drugs they took with RRMS if they helped. Medications for active SPMS include cladribine and mitoxantrone.

Most patients with SPMS have fewer relapses than they would have with RRMS since there is less inflammation. However, the symptoms steadily worsen over time. Unlike RRMS, remissions in SPMS are incomplete and symptoms often remain present.

Like RRMS and PPMS, secondary progressive MS can be categorized with modifiers like active and not active, and with progression or without progression.

The most common early indicators of SPMS are:

People with SPMS may also have cognitive problems, such as trouble with short-term memory and concentration.

Although it is not considered a type of multiple sclerosis, radiologically isolated syndrome (RIS) refers to MRI abnormalities that are consistent with lesions of MS and are not explained by another diagnosis. Someone with RIS has no past or current neurological symptoms, or abnormalities found on neurological exams.

A 2020 global study of 451 people described as having RIS found that 51.2% went on to develop MS within 10 years. Factors that were associated with increased risk of developing MS included younger age, MRI lesions in the spinal cord or lower back part of the brain, newly active lesions on follow-up MRIs, and signs of spinal fluid proteins known as “oligoclonal bands.” The presence of these proteins indicated inflammation in the central nervous system, which is associated with MS.

MS can be a difficult disease to live with no matter what stage of the condition you are in. The unpredictable nature of the disease can make it hard to know how it will progress. It will be important to work with your doctor to keep track of your symptoms and report any new or worsening symptoms.

If you have multiple sclerosis, you are not alone. At PatientsLikeMe, there are almost 75,000 members who are also living with MS. Join them today to learn about how they manage their condition.