It’s normal to feel down sometimes. It’s even normal to feel hopeless or in despair about a particular situation or circumstance. These feelings are temporary. They may last anywhere from a few hours to a few days and cause minimal disturbance in your day-to-day activities.

But, when these feelings become constant, more intense, and lasts for more than two weeks, you may have major depressive disorder.

What is Clinical or Major Depression?

Major depressive disorder, or clinical depression, is a serious mental illness that can interfere with daily activities like work, school, sleep, and leisure. You may feel less motivated to spend time with friends or family, and instead choose to spend more time alone.

This type of depression is much more severe than other kinds of depression, like acute depression or persistent depressive disorder. It’s a severe mood disorder that negatively affects how you feel, the way you think, and how you act.

Because clinical depression impacts feelings, thoughts, and behaviors, also known as the cognitive behavior triangle, it often interferes with everyday functioning. People with clinical depression may start to have poorer hygiene, worse performance at school or work, and less interaction with friends and family.

For some, clinical depression only occurs once in their lifetime while for others it may occur several times over the course of their life.

What are the Symptoms of Clinical Depression? 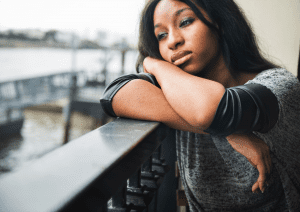 Depression lives on a spectrum of severity, ranging from mild to severe. There are three main classes of depression: mild, moderate, or severe.  Severity is based on the number of criteria of symptoms, the intensity of the symptoms, and the degree of functional disability.

The diagnostic criteria for major depressive disorder according to the American Psychiatric Association Diagnostic and Statistical Manual states that at least five of the following symptoms must be present every day, or nearly every day, during the same 2-week period. In addition to symptoms being present, there must also be a change in previous functioning. Symptoms include:

Depression is classified as mild if only a few symptoms required to make the diagnosis are present. It may also be considered mild if symptoms are distressing but manageable or result in only a minor impairment in functioning.

Moderate depression is marked by more than a few symptoms, increased intensity, and if functional impairment falls between “mild” and “severe”.

In 2019, the National Institute of Mental Health estimated that 13.1 million U.S adults had at least one major depressive episode with severe impairment in the previous year. Severe major depression is characterized by an excess number of symptoms, intensity of symptoms that is seriously distressing and unmanageable, and marked interference with social and occupational functioning.

The causes of depression are complex. There are many different causes of clinical depression, including:

It’s likely that multiple causes will combine to trigger depression. This is what some people commonly refer to as a “downward spiral”, where one triggering event leads to another, resulting in greater feelings of depression.

Researchers have found that genetics can play a role in major depressive disorder. In a worldwide genome study, they identified 178 gene variants liked to major depression. In this study, researchers collected genomes from more than 300,000 participants in the V.A’s Million Veteran Program (MVP). They combined this data with genetic and health records from the UK, Biobank, FinnGen, and 23andME, totaling 1.2 million participants. Through this vast and diverse data set, they found those who have at least one of the 178 gene variants are at a higher risk of developing depression at some point in their life.

The most common gene variants were associated with NEGR1, DRD2, and TRAF3. These specific genes are expressed in the hypothalamus, nucleus acumens, and plasma membranes, respectively. Each of these plays a key role in hormone production, motivation and action, and immune responses.

Another way researchers have been able to identify the role of genetics and depression is by examining illness within a family and sets of twins.  A meta-analysis of twin research data showed that the heritability rate for depression is 37%. This means that if one twin has depression, the other is 37% more likely to have the condition, too.  Another meta-analysis showed that children of biological parents who had a history of depression have a two to three times higher risk of depression, compared to those children whose parents didn’t have a mental illness.

This is why medications are commonly used to treat major depressive disorder. Medications like selective serotonin reuptake inhibitors (SSRIs) help alleviate depression by balancing the neurotransmitters in the brain. While medications can help, it’s important to remember that all medications affect everyone differently. You may need to try several different medications before finding the right one for you.

It’s easy to think of the mind and body as two separate entities, but more and more research shows that the two are more connected than you think. Physical health problems, like illness, injuries, or vitamin deficiencies can increase the risk of developing clinical depression.

Studies show that one-third of people with a chronic illness experience depression. After a diagnosis of a serious illness or long-term injury, feelings of sadness, hopelessness, and confusion may arise. While this is normal in the beginning, the daunting feeling of the long-term condition can prolong these feelings. If left untreated, it can turn into clinical depression.

In addition to illness or injury, vitamin deficiencies have also been shown to contribute to depression. Some more noticeable food patterns that precede depression are similar to those that occur during depression, like low appetite, skipping meals, and sugar cravings. When these patterns start to occur, it increases the likelihood of malnutrition.

Studies show that low levels of vitamins and minerals like vitamin D, vitamin b12, omega-3 fatty acids, folate, and magnesium are all linked to increased risk of depression. Each of these vitamins and minerals is vital in the body’s ability to produce and regulate hormones and support brain function.

While it’s easy to start supplementing these nutrients, it’s best to first consult with your doctor and get blood work done to confirm any deficiencies. Too much of any of these can result in other issues, like hair loss, fatigue and weakness.

Clinical depression and addiction often work in cycles where one contributes to and can exacerbate the other. Studies show that about one-third of people diagnosed with major depression also have a drug or alcohol abuse problem.

Although some drug and alcohol use often begins in a recreational setting, it can rapidly progress to a form of self-medication. People often use drugs or alcohol to boost their mood, reduce negative feelings, or “numb out”. While this short-term fix can work at first, long-term use of substances can make feelings of sadness worse.

Environmental and psychological stressors can also contribute to depressive episodes. Some common stressors may include:

Stress can trigger the fight-or-flight response, also called the stress response. This response can activate a number of subsequent responses throughout the body that results in the production of hormones like cortisol, the stress hormone. When these levels don’t return back to normal levels, called DST non suppression, it can increase the risk of depression.

Staying under chronic stress taxes the body beyond what it can handle, impairing daily functioning. Too much stress can cause a lack of motivation, isolation, and may lead to depression.

How is Depression Different from Normal Sadness?

Sadness is a common human emotion that everyone experiences from time to time. It’s characterized by a range of feelings from unhappiness and low mood to extreme despair and anguish. Feeling sad is a normal response to situations that are upsetting, painful, or disappointing.

With intense sadness, it’s normal to experience changes in sleep or appetite. You may even notice a decrease in motivation or desire to spend time with friends and family. After a few days or a week, sadness starts to disappear, and you will start to feel like yourself again.

How is Clinical Depression Diagnosed? 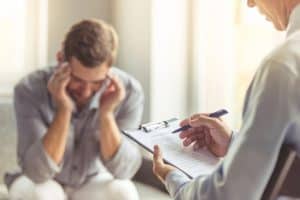 If you are feeling intense sadness, less motivation, or a lack of interest in activities, make sure to tell a health care professional. A primary care doctor will perform a thorough medical evaluation to rule out any physiological issues, like a vitamin deficiency. They will also do a depression screening.

How is Clinical Depression Treated?

Clinical depression cannot be willed away, nor does it get better on its own. While people who struggle with depression may feel hopeless, it is an incredibly treatable condition. Depending on the severity of symptoms and physical health, a psychiatrist may prescribe an antidepressant to help regulate your mood. A therapist can also help you get to the root cause of your depression and address your emotional state through various types of therapies.

It’s common for people who have depression to use both traditional forms of treatment, medications, and therapy. There are also holistic approaches that are commonly used in addition to traditional methods, such as:

What If You Feel Depressed?

If you think you may be depressed, talk to your doctor immediately. The longer you go without any treatment, the worse depression can get. While it can be scary to seek treatment, know you aren’t alone. There are thousands of members at PatientsLikeMe who have depression and know what you are going through. Join the community today to connect with other members who are sharing their experience, strength, and hope, as they overcome their mental illness.