Multiple sclerosis is a progressive autoimmune disease that affects nearly 1 million people in the United States. In MS, the immune system attacks myelin, the protective sheath that surrounds the nerves in the brain and spinal cord. Damage to these cells causes symptoms like pain, fatigue, impaired coordination, and vision loss. It can also cause cognitive changes that affect attention, mood, and motivation.

Although the exact cause is unknown, the connection between the human herpesvirus Epstein-Barr and MS has been suspected for many years. Recent studies have found that people who have the virus are likely to go on to develop the disease.

What is Epstein-Barr Virus?

Epstein-Barr virus, commonly referred to as EBV, is a member of the herpes virus family. It’s one of the most common human infections that most people contract during childhood, though it doesn’t usually cause symptoms. Teenagers and adults who get EBV may experience symptoms like:

Symptoms usually resolve within two to four weeks of infection, though some people may experience fatigue for several weeks or months after.

Epstein-Barr is mainly spread through the exchange of saliva, like by way of kissing or sharing a glass with someone. Although, it can also spread through blood, like organ transplants or infusions, and sexual contact. 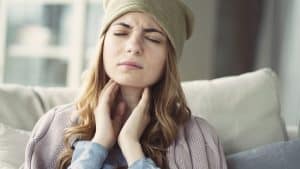 EBV can cause infectious mononucleosis, more commonly known as “mono”. Mono is a highly contagious disease that can cause symptoms such as extreme fatigue, sore throat, fever, rash, and head and body aches. The symptoms usually appear four to six weeks after EBV infection. Mono is more common in teenagers and young adults, though anyone can contract the virus.

Even after the symptoms of infectious mononucleosis or Epstein-Barr have disappeared, EBV will remain dormant in the body throughout their lifetime. The virus may reactivate periodically, but usually without symptoms. If the virus reactivates, it can spread to others no matter how much time has passed since the initial infection.

EBV Likely Leading Cause of MS

A new study led by Harvard T.H. Chan School of Public Health researchers has found that the Epstein-Barr virus is likely a leading cause of MS. Using data from 10 million young adults on active duty in the United States military between 1993 and 2013, researchers found that the risk of MS increased 32-fold after EBV infection. The researchers analyzed serum samples taken every two years by the military and determined the soldiers’ EBV status at the time the first sample was taken. They also determined the relationship between EBV infection and MS onset during the soldier’s period of active duty. Out of the population studied, 955 soldiers were diagnosed with MS during their period of service.

In a preliminary study published in 2010, researchers found that MS risk was extremely low for people who were not infected with EBV, but increased significantly in the same individuals following EBV infection. This study, which included data from U.S. military personnel with at least one serum sample in the Department of Defense Serum Repository, 10 out of 305 multiple sclerosis cases were EBV seronegative at baseline. This means those individuals did not have antibodies for EBV at the start of the study. During a follow-up period, all 10 cases became EBV positive before the onset of MS.

In the recent Harvard-led study, the risk of MS did not increase after infection of other viruses, including cytomegalovirus (CMV). Cytomegalovirus is another common virus that infects nearly one in three children by the age of 5 and more than half of adults by the age of 40. Like EBV, CMV remains inactive in a person’s body and can reactivate later.

To rule out the possibility of MS preceding Epstein-Barr, the researchers also measured levels of protein in the blood. These proteins become elevated in serum when neurons are injured or die off, serving as a marker of the beginning of the pathological process before clinical symptoms appear. They found that protein levels only rose after an EBV infection.

EBV and Genetic Predisposition to MS

While the risk of multiple sclerosis increases after an EBV infection, not everyone who gets the virus will go on to develop MS. For Epstein-Barr to trigger MS, researchers concluded that there must be other causes at play, like genetic predisposition and environmental factors.

It’s been well known for decades that genetics play a primary role in the development of multiple sclerosis. The gene variant HLA-DR15 has been shown to have the strongest association with MS. This specific variant is responsible for up to 60% of genetic risk. If carriers of the variant are infected with Epstein-Barr, the risk of MS increases 15-fold.

The gene products of the HLA-DR15 control how the immune system forms an immune response to recognize and fight pathogens. One location of the HLA-DR15 molecule is on the surface of white blood cells, which fight infections. Here, they provide protein fragments to the T lymphocytes. The T lymphocytes control the immune system response and helps the body learn to distinguish foreign cells from the body’s healthy tissue.

However, they found that the gene variant presented fragments of themselves to T lymphocytes instead of protein fragments. This caused the T lymphocytes to migrate into the blood and pick up fragments of the Epstein-Barr virus if a person becomes infected with it. The virus-infected cells are then able to travel to the brain and react with the body’s own proteins, triggering an autoimmune reaction like MS.

Two more studies found a link between Epstein-Barr virus, B cells, and MS. B cells are known to produce infection-fighting antibodies. Antibodies are meant to bind to molecular targets called antigens, like a virus, and trigger the immune system to attack. 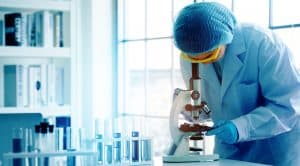 B-cells float around the body with antibodies on their surface. If the antibody binds to an antigen, the B-cell activates and rapidly produces pro-inflammatory signals to let the rest of the immune system know there is an invader. Activated B-cells divide to produce more cells and undergo a process called somatic hypermutation (SHM). The SMH process increases the antibodies’ ability to confront and attack antigens.

In one study, researchers analyzed B-cells collected from nine patients, five with clinically isolated syndrome (CIS) and four with relapse-remitting MS (RRMS). They found that the cells were behaving as though they were attacking antigens like they should be. However, further analysis of 148 unique B-cells from cerebrospinal fluid showed that the antigens the B-cells’ antibodies were targeting were an EBV protein called EBNA1. EBNA1 closely resembles a human protein in the brain called GlialCAM, which is expressed by cells that are responsible for producing myelin.

Tests showed that the antibodies were able to bind to GlicalCAM in the same way it binds to the viral protein. Blood samples showed that MS patients have a markedly higher level of antibodies that target GlicalCAM.

The findings from these studies suggest that B-cells that encounter the Epstein Barr virus target and activate the EBNA1 protein. Upon activation, B-cells undergo SMH, which is where researchers believe the cell inadvertently becomes apt to target GlialCAM instead of EBNA1. The antibodies bind to GlialCAM, expressed by the healthy cells in the nervous system, and results in an attack on the immune system ultimately leading to MS.

There is currently no approved vaccine to prevent EBV infection. However, vaccines are in the process of being created. Moderna recently launched a phase 1 trial of an mRNA vaccine for Epstein-Barr. The study, called the Eclipse Trial, is a randomized, observer-blind, placebo-controlled study with multiple dosages. This means that they have randomly assigned participants to an experimental and control group, and the researchers who are monitoring the participants do not know which group has the drug or placebo.

Study participants are healthy adults between 18 and 30 years old. They will randomly assign participants to one of four arms: one for each of the three dosages being investigated and one placebo.

Dr. Jeffery Cohen of The National Institute of Allergy and Infectious Diseases also anticipants beginning a phase 1 trial of another vaccine in 2022, however, they have not publicly announced details of the trial.

While it is still unclear if these vaccines will be successful, evidence supports the idea that if a vaccine can prevent EBV, it is likely to dramatically reduce instances of multiple sclerosis.

You Are Not Alone

If you know you have been infected with the Epstein Barr virus, don’t panic. While it can be frightening to know you are at a higher risk for developing the condition, the virus alone cannot cause MS. If you start to notice symptoms common in multiple sclerosis, talk with your doctor immediately.

Whether you are experiencing MS symptoms for the first time or have been diagnosed with multiple sclerosis for many years, you are not alone. There are over 75,000 members at PatientsLikeMe who are living with the condition. Join the conversation today to get the support you need.