“Our countries have come together, but our people have not”: PatientsLikeMe’s Margot shares her story

Margot visiting the location where her father’s plane may have crashed in 1966. Photo courtesy Istrico Productions.

Margot Carlson Delogne is the Vice President of Communications at PatientsLikeMe. She is also the child of an American soldier lost at war.

This Memorial Day we wanted to show how she’s working on her own healing process, but also repairing some of the divide left in the aftermath of the Vietnam War. In December 2015, Margot, along with five other grown sons and daughters of American fathers who were lost in the war, travelled to Vietnam to confront the painful history of the parents they’d lost and to meet face-to-face with grown Vietnamese children who had also lost parents in the same war, but on the opposite side. The journey, named The 2 Sides Project, also allowed the group to visit the locations where each their fathers had fought and died, an experience that left Margot “changed forever.”

“My father’s plane went down 200-300 meters from a bunker that had been his target,” Margot says of her father, Air Force Captain John W. Carlson, who was shot down in December 1966. “We looked at online maps before we went and they showed an odd line of trees along the edge of a road, and exactly 200 meters from that, another set of trees that looked different from the rest…So we went to that area and got permission to walk toward the spot. One of the other American sons on the trip, Ron, watched his GPS and reported how close we were every few steps. He stopped me when his map said 200 meters and pointed in front of me. I looked and saw a crater. I asked Ron if its shape and size were natural and he said no, he didn’t think so. So, I walked into it and sat in the center. That’s where I held my father’s service. I read messages from my sister and my mother and played a favorite song of my father’s, Greensleeves. Margaret, a fellow airman’s daughter on the trip, helped me read the poem High Flight, by John Gillespie Magee, Jr. I climbed out of the crater and left, a little lighter than before.”

Margot sitting in the crater where she held her father’s service. Photo courtesy Istrico Productions.

In the same trip, Margot and the group also met with twenty Vietnamese sons and daughters who were children of parents lost fought in the war on the opposite side. Their meeting, according to Vietnamese officials, was the first formal one between children whose fathers died fighting on both sides of the war.

Mr. Xiem, 66, took part in one of the historic meetings, sharing with the group that his father had been killed by American bombs in 1965, and two years later his school was bombed by an American aircraft killing 33 students at 1 teacher. “When I was informed that I would meet with The 2 Sides Project and interact with children of U.S. soldiers killed in the Vietnam War, I began to think a lot,” Mr. Xiem said. “My feelings gradually changed from hatred and resentment to empathy and pity for the children of American soldiers killed in the Vietnam War. When I came to the meeting, I saw the lack of confidence, the anxiety on their faces…I witnessed their tears. And at that moment my hatred seemed to melt away, leaving only sympathy.”

The entire journey, which has been covered by the New York Times and the Washington Post, was documented in film by Anthony Istrico, Director and Founder of Istrico Productions, and premiered at the GI Film Festival last night. Three members of the Vietnamese group joined Margot and the five other American sons and daughters for the premiere – watch the trailer here. They also visited the Vietnamese Embassy and the Vietnam Veterans Memorial, along with a number of other cultural activities, and ABC News was there to cover their journey.

When she presented the idea of the 2 Sides Project to the Vietnamese government, the official’s reaction amazed her. “He looked me in the eye and said ‘our countries have come together but our people have not, and I think your project will help. We will support you however we can.’ That’s when I knew this was going to become a reality.”

In her own way, Margot is working to mend the rift between the two countries the best way she knows how, communication. To read updates and stories about their journey, visit the 2 Sides Project website .

Caregivers and companions – PatientsLikeMe members talk about their service animals 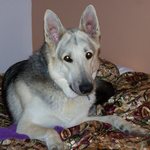 Service animals are often a topic of conversation in the PatientsLikeMe community, and many members frequently share their experiences with their furry friends. For example, Ted wrote about his service dog Catti-Brie in his blog interview.

Here’s what other members are sharing about their animals:

“Just last night when I was having a rough dream [my dog] stood with his paws front paws on the bed and barked till I picked him up and he laid across me and snuggled me to sleep again.”

“I have a mobility service dog that helps with my balance. It’s like having a smart cane. When we go for walks she wears her mobility harness, but when we are home she only wears it when I’m having a bad day. She is also trained to do many other things like get items for me, and pick up things I dropped. She can also turn on/off the lights and open/close doors.”

“Mali is my mobility and medical alert service dog. She has saved my life twice so far… as well as told two of my friends when they had tumors. She went through a spell when she was younger when she thought she had to tell everyone who was ill where their boo boos were.”

Previously, members shared their experiences with service animals in a Canine Caretakers blog post, and others contributed to forum posts on the same topic. If you would like to share about your service animal, head to PatientsLikeMe. Don’t forget to share a cute picture of your pooch (or other animal)!