Charting the course of PLS and PMA

Primary Lateral Sclerosis (PLS) and Progressive Muscular Atrophy (PMA) are two rare variants of the disease ALS. Normally, ALS affects the upper motor neurons in the brain and spinal cord, as well as the lower motor neurons that send signals from the spinal cord directly to muscles. PLS and PMA are different because PLS only affects the upper motor neurons, and PMA only affects the lower motor neurons. It’s an important distinction for patients to be told about because the prognosis is less severe in these conditions.  On average, survival in ALS is typically reported to be 2-5 years, whereas for patients with PMA it’s more like 5-10 years and for PLS it’s even longer (often several decades).

ALS itself is a rare condition, affecting some 30,000 people in the United States at any one time.  PLS and PMA each represent approximately 5% of the overall ALS community, so there’s approximately 1,500 patients with each condition in the U.S at any given time.  In April 2008, PatientsLikeMe added the ability for members of our ALS community to change their diagnosis to these rare conditions.  To date, we now have 182 patients with PLS and 270 with PMA. This is truly exciting because even the largest studies in the literature have only examined 40 or so PLS patients and a similar number of PMA patients. One of our most useful features on our site for people with ALS is the percentile curves, which we display as a backdrop on their profiles to put each individual’s rate of progression into context. However, as you can see in the figure below, when you compare the progression curves of ALS patients on our site with those of a typical PLS patient, the PLS patient progression deviates significantly from the ALS curves. 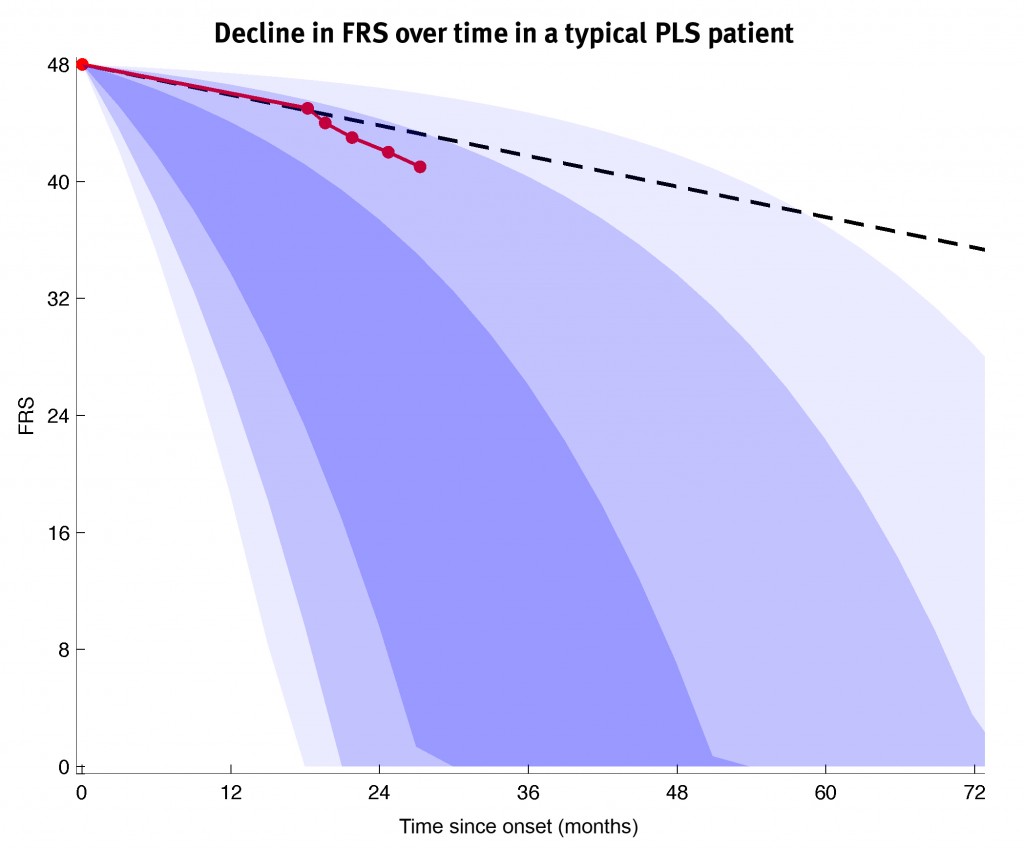 With so many PLS and PMA patients sharing such valuable information about their disease on PatientsLikeMe, we had enough information to generate a new set of percentile curves for each of those communities.  To do this, we used self-report ALSFRS-R (ALS functional rating score – revised) data from 104 PLS patients and 59 PMA patients that met our criteria for data quality. We have good data for the first 4-5 years of disease after onset, and after that point we rely on linear extrapolation to make the plots.  Here we see the value of openness in action.  When you see the potential value in contributing your data, it drives a virtuous cycle: the more data you enter, the more value you get, so you enter more data!

As any of our patients in these communities will tell you, being diagnosed with a rare disease can be a frustrating experience. Aside from dealing with the condition itself, there’s the lack of public awareness, a lack of research investigating your condition, and a sense that you are being “lumped in” with a similar disease because your community doesn’t have the critical mass to merit its own attention.  These new percentile curves for PLS and PMA patients demonstrate the value and power of openness.  By sharing their health data in an open fashion, patients are providing new insights that are changing how we think and act when it comes to these very rare conditions.

Note:  A potential limitation of these curves is that they represent the outcomes for patients that are members of PatientsLikeMe and may not be generalizable to the entire population; we are working hard to better understand and correct for the biases in our population and data. As the size and longevity of each community increases, we will be in a better position to address these issues.

There are rare diseases, and there are rare diseases. Here at PatientsLikeMe our first community was built for patients with ALS (estimated US Prevalence: 30,000), and in common with our other neurological communities there is a familiar list of challenges: low public awareness, little funding for research, and a lack of adequate treatments. However, over the past year or so I’ve really had my eyes opened to the differences between “rare” and what you might call “super-rare” conditions, such as Devic’s neuromyelitis optica. Nobody really knows how many people Devic’s affects as it is frequently confused with MS, but there are probably only a few thousand patients with this condition in the world. That’s why we’re incredibly proud that our Devic’s community currently has 136 registered patients sharing health data with one another; that’s more than 5 times larger than the largest study I’ve seen on the condition in the scientific literature (which included collaborators from around the world in seven specialist centers over the course of several years).

I was privileged to be invited to speak at the annual meeting of Eurordis (The European Organization for Rare Diseases) in Athens, Greece, to meet with some of the leading online health efforts in this space. Attendees included non-profit organizations, medical professionals, and patients themselves from all over Europe.  We all convened to discuss some of the most innovative tools available on the web for patients to find other patients like them, share their data, and improve their outcomes. PatientsLikeMe was featured as an ambitious and innovative effort to accelerate the pace of research in rare diseases but we also saw great initiatives that had come from the frontlines of rare diseases.  In fact, the point about ultra-rare diseases was driven home in the opening keynote by Yann Le Cam when we heard that there are some 5,500 rare diseases cataloged by Orphanet (including Devic’s) which are not in the ICD-10 taxonomy of diseases. Ultimately, at PatientsLikeMe, our goal is to build a community for every life-changing illness that exists, but what can patients with these conditions be looking for in the meantime? 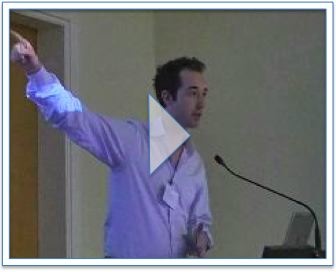 The highlight of the meeting for me was seeing the incredible work being carried out at Duchenne Connect.org (The Netherlands) and Duchenne Connect.org (USA). Founders Elizabeth Vroom and Pat Furlong gave an overview of their experiences building patient-focused programs that allowed parents of children with Duchenne’s Muscular Dystrophy to support one another, accelerate the efforts of researchers, and bring greater attention and focus to patients affected by this rare disease. From the other side of the Atlantic, Mary Dunkle from NORD (National Organization for Rare Diseases) made a clear statement that online communities have the power to be far more than just bulletin boards and blogs for patients to use for emotional support. In her presentation, she stated: “We want to move beyond simply providing emotional support…to facilitate action that produces results”; we couldn’t agree more. Videos of the talks from these amazing patient advocates (along with many other talks from the meeting) can be viewed online here at the Eurordis website.

There were a number of challenges that were highlighted during the meeting. David Golub was the first to articulate that there are serious ethical issues implicit in for-profit companies (like us!) being involved in patient research that was traditionally the remit of academics and clinicians. He asked us to all consider what we can all do to “protect the public commons?”. Unsurprisingly for a European audience, there was much concern about language specialization.  Patient advocates insisted on better localization to allow broader access to non-English speakers, and for providers like us trying to find innovative ways to ensure excellent content that can be dynamic and accessible for all. My own view is that technology (like Google Translate) will outpace any system we could possibly resource with human translators.

Finally, there was the question put to us by event organizer Denis Costello from Eurordis; how can small non-profits in ultra-rare diseases partner with organizations like PatientsLikeMe?  It’s something we think about every day. Our Devic’s community came out of our MS Community; PSP and MSA came from Parkinson’s; and PLS and PMA came out of ALS. We are developing strategies to build communities for “clusters” of communities that will allow us help a broader swathe of patients with both prevalent and rare conditions. It was hugely encouraging to see the energy, ingenuity, and determination that you see when advocates are passionate about helping patients.