What do you know about cervical cancer?

January is Cervical Health Awareness Month, but it’s not just a month to learn more about cervical cancer, it’s about learning how to prevent it. Since the 1950s, there’s been in increased effort to raise awareness for prevention screening, and from 1955 to 1992, the cervical cancer incidence and death rates declined by 60 percent.1

But there’s still work to be done, as the NIH estimates that over 12,000 women will still be diagnosed with cervical cancer in 2015.1

Our own Priya Raja spoke about cervical cancer awareness on the blog about a year ago, and she stressed the importance of Pap smears and making them available to all women around the world. During January, the awareness focus will be on preventative screening as well as cervical cancer itself, because as Priya said, “being screened just once can reduce the likelihood of having cancer.”

You can learn more by checking out the National Cervical Cancer Coalition’s website and the Center for Disease Control and Prevention’s infographic on cervical cancer (featured to the right). And if you’ve been recently diagnosed with either HPV or cervical cancer, reach out to others like you in the PatientsLikeMe community.

Women: Protect Yourself Against Cervical Cancer

Each year in the US approximately 12,000 women are diagnosed with cervical cancer, and more than 4,000 lives are lost as a result. What makes this such a tragic statistic is the fact that cervical cancer can be prevented through vaccines and regular screenings in almost every case.  That’s the all-important message to spread during Cervical Health Awareness Month, which takes place every January. 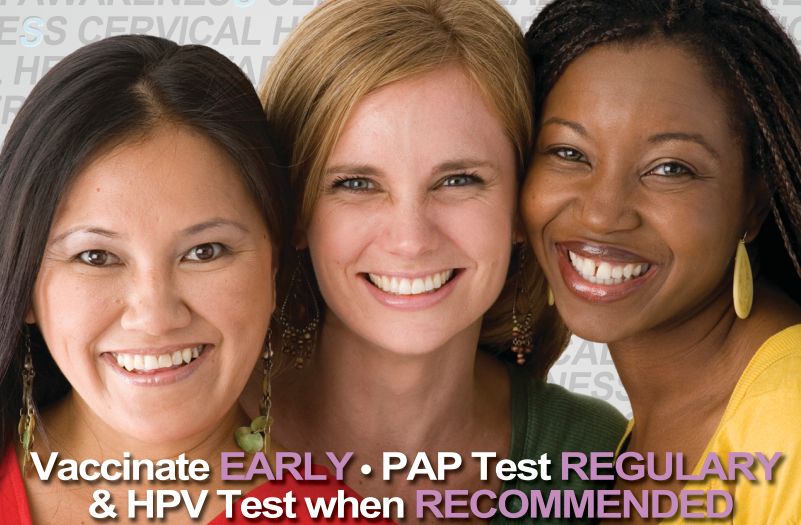 How does a vaccine help prevent cervical cancer?  By blocking the Human Papillomavirus (HPV), a common infection that almost everyone who is sexually active will have at some point.  We now know that cervical cancer is caused by specific strains of HPV, and as a result, researchers have determined that you can help prevent this life-threatening form of cancer by working to prevent the preceding infection.

The three-part HPV vaccine (marketed under the brand names Cervarix and Gardisil) is available for women age 26 and younger.  If you’re within the eligible range and interested in learning more, talk to your doctor about the costs, details and scheduling of this vaccination, which takes place over the course of six months and is now covered by a majority of insurers.  What if you’re older than 26? You can stay vigilant by getting regular Pap exams (recommended from age 21 and up) and taking an HPV test when recommended. That way, you can catch any infections or signs of cancer early, and get treated promptly.