“I have a hope that this foundation has a short life. We exist to help fund and find a cure. To do that we need to generate and raise awareness of Parkinson’s disease and its impact to the public. Awareness in turn will aid in generation of funding. Funding for a cure and funding for the personal side of the disease. Programs to get people moving, walking, riding, dancing, and exercising.”

When PatientsLikeMe member Mike Justak (MJUSAK) realized that Parkinson’s disease (PD) funding was lagging, he decided to take action.  His goal:  to “put a face to Parkinson’s” and highlight the fact that it occurs in patients under the age of 50 as well as older patients.

Mike founded the Mike Justak Foundation for Parkinson’s Disease, and this year he began working on a “Faces of Parkinson’s Video Wall.”  It’s a pastiche of videos submitted by PD patients around the country that he plans to submit to the Parkinson’s Action Network, state governors and US senators.  To add your “face” to the project, all you have to do is submit a short, close-up video stating who you are, where you’re from and what you do.  See Mike’s sample video submission below.

As Men’s Health Week concludes, we’d like to honor Mike for his efforts as well as thank PatientsLikeMe members tiredoftired and Rick N for sharing their essays about depression and multiple sclerosis (MS) earlier this week.  We salute all of our male members for making their voices heard!

Most people think of Parkinson’s disease (PD) as a condition of aging, and most of the time they’re right. Looking at the population as a whole, about 1-2% of people over the age of 65 have PD, and it’s usually a condition that is most severe in patients in their 70’s and 80’s. However, about 10% of patients buck this trend and experience their first symptoms before the age of 40; these patients are known as Young-Onset PD or YOPD for short. The R&D team here at PatientsLikeMe recently carried out a research study examining an aspect of PD that has only recently gained much attention, “non-motor symptoms.” When a clinician diagnoses PD, they are usually looking for a triad of cardinal features, specifically tremor, slowness, and stiffness. However, in the past 5-10 years it has been increasingly clear that patients with PD also experience a number of non-motor symptoms, ranging from dizziness to constipation, from a loss of sense of smell to hallucinations, and from apathy to urinary problems.

Several of our members had mentioned in forum postings that they were finding non-motor symptoms, such as cognitive confusion and fatigue, to be a particular burden, so we decided to carry out a research study using the well-validated Non-Motor Symptoms Questionnaire (NMS-Quest) developed by Professor Ray Chaudhuri and colleagues. We sent the survey out to all of our PD patients earlier this year. In total, we got responses from 307 patients, including 260 “classic” PD patients and 46 with YOPD. The results show a higher number of non motor symptoms among YOPD patients (14/30) than PD patients (11/30). That’s an average of three more non-motor symptoms for YOPD patients than their older counterparts. More specifically, YOPD patients (at the individual level) report apathy, concentration problems, falls, pains, and sadness more often than older onset PD patients.

You can listen to a short presentation, or read our full report for a more detailed analysis of our methodology and findings, but there were several points I found particularly interesting. 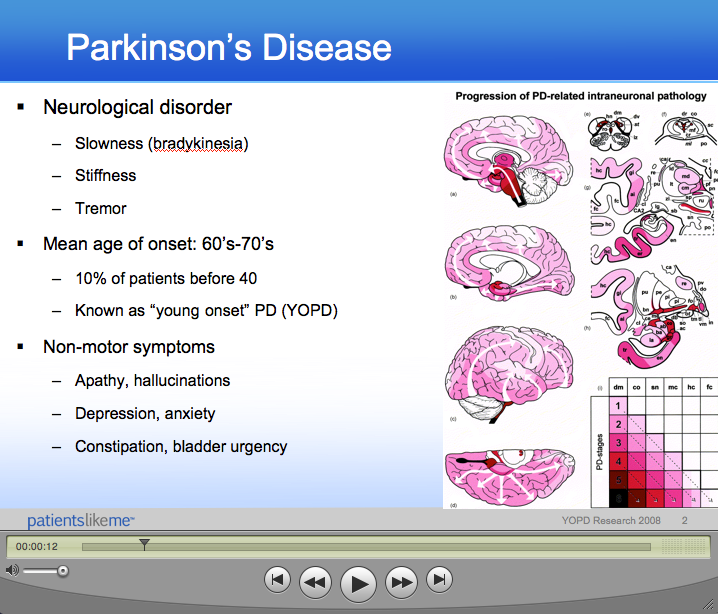