Do you know someone with pulmonary fibrosis? Thanks to the Pulmonary Fibrosis Foundation, today – Sept 7th – is dedicated to raising awareness about this condition and sharing the stories of patients living with PF. It’s Global Pulmonary Fibrosis Awareness Day, and we want to do our part to help raise awareness of this lung condition. Pulmonary fibrosis (PF) causes scarring and thickening in deep lung tissue over time.

We recently announced that the PatientsLikeMe community has grown to include more than 1,000 patients with idiopathic pulmonary fibrosis (IPF). IPF refers to cases where the cause of the condition is unknown, and it affects over 100,000 people in the United States alone.[1] Our collaboration with Boehringer Ingelheim has made the acceleration to enhance our community for PF patients possible. So for Global Pulmonary Fibrosis Awareness Day, we’d love to share what we know about this condition, people’s experiences with it, and the stories behind the people living day in and day out with the disease.

More and more IPF patients are sharing their real world experiences on PatientsLikeMe, monitoring their own health while connecting with others just like them. We’ve done a series of blog interviews with our members, including Lori, Kim, Jeff and Ian, as well as other patients like Sarah and Keith.

Beyond the stories, our members are sharing experiences about what it’s like to live with their IPF. Here’s a snapshot of what we’ve learned about their real-world experiences, including a quote from Lori, an interviewee and amazing individual who was diagnosed with IPF in 2011 and has been connecting with PatientsLikeMe members ever since. 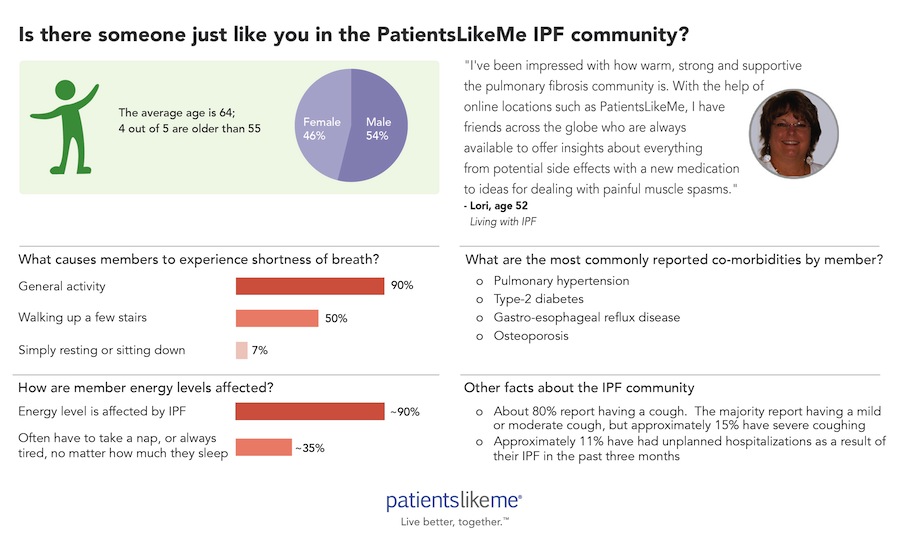 As the PFF says, today is about sharing stories and raising awareness of a condition that affects over half a million Americans. You can help by sharing your story and experience here and through campaigns run by the Pulmonary Fibrosis Foundation and the Coalition for Pulmonary Fibrosis.

Every story, every voice, and every experience matters when coming together to make a difference for pulmonary fibrosis.

Many of you have seen our “Spotlighted Blogger” series, where we talk with people who are sharing their personal health experiences to help raise awareness of disease and change healthcare for good. Well for the first time on our blog, we’re talking with a “Facebooker.” Kim started her Facebook page, Pulmonary Fibrosis Awareness, after her father passed away from idiopathic pulmonary fibrosis (IPF). She recently took some time to talk with us about her experiences with the disease and the benefits of online patient communities. 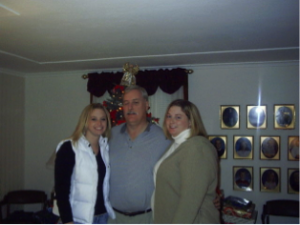 Can you tell us a little about yourself and your experience with IPF?
My father was diagnosed with IPF in July of 2006. He always had a chronic cough and never got it checked out until one day it got really bad and my step mom made him go get checked out. He had a chest X-ray and the doctor gave him the tentative diagnosis of IPF. Surely, the only true way to know if a person has IPF is through a lung biopsy so that’s what he had done, I believe in September of 2006.

There was a complication during the biopsy. His lung collapsed and he was in the hospital for about 6 weeks. The lung never did fully inflate. He ended up having 2 chest tubes while in the hospital. He was in good spirits though, always reassuring me that he was doing well and things would get better. Over the next few months he started the process of getting on the lung transplant list at Duke University. He did all the rigorous testing and lost the weight. I went to take care of him for a few days and while he had trouble with catching his breath when walking around, he was still walking on the treadmill to lose that weight. He was in good spirits even though he was exhausted. He was on oxygen therapy 24/7. At Christmas time, we spent the day together and he had a hard time talking because he couldn’t breathe very well. It was the last time I heard my father speak.

A few days later they moved to NC where they waited for the call. His health deteriorated quickly and about a month later he was rushed to the hospital because he couldn’t breathe. It was a Thursday when I got the call from my step mom that my dad was intubated and that my sister and me needed to go down to NC to be with him. She informed us that it wasn’t good and that it was the end. It was the hardest trip I ever had to make. 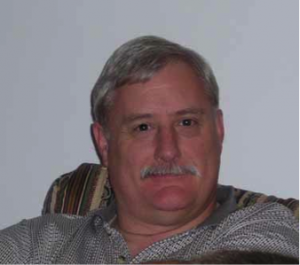 We walked up to his hospital room in the ICU and I slowed down before we got to his room and I looked in and backed away and fell to the floor, crying. I couldn’t believe that my father, this strong man, was lying so helpless in a hospital bed, so dependent on machines to keep him alive. The kind staff at the hospital helped me go to my father in the room where I sat by his side. I didn’t hold his hand right away. Touching isn’t something he liked so I respected that. We spoke with the doctors and nurses and organ donation coordinators. We waited as long as humanly possible for lungs to become available. It was decided that Saturday he would be taken off the list because he had been intubated too long and his heart was working too hard. We could have extubated on that day but I know my father and I believed he wanted to be an organ donor. So we postponed his passing by one day so that the donor team could get ready with recipients.

The next day around 7:30am we arrived at the hospital to say our goodbyes. I remember checking his monitors pretty regularly and when we walked in his heart rate was around 70 and when my sister and me finally held his hand, his heart rate went up to 87. We talked with him privately about what his final wishes were. We knew he couldn’t talk but we wanted to talk to him anyway and try to get any sort of response out of him. We waited a couple more hours for the stuff to be put in place and then they wheeled him down to the operating room. We waited in the family room for a few minutes where the coordinator went over with us what to expect. They said that if he breathes on his own for 10 minutes after he’s extubated he will be intubated again and taken back to his room. But this never happened.

We were there for him during his final minutes. Telling him that it was ok to move on, that we would be ok. I am next of kin so it was my decision to make him an organ donor and my decision to take him off life support. It’s my signature on those papers. Something I will never be able to change. The hardest thing I’ve ever had to sign in my life. We watched as he peacefully tried to breathe. After his last breath, we all continued to sob and the doctor confirmed that he had passed.

We had approx 2 minutes to say our final goodbye before they wheeled him in to the OR for organ recovery. It wasn’t a good atmosphere for us to be in when he passed because there were teams of doctors and nurses standing in this big room with us waiting for him to pass. But I tried not to focus on that part too much. My step mom was at the helm, talking to him while he tried to breathe. At about 10am on Jan 28 2007 my father passed away waiting for a lung transplant due to IPF.

You’ve been very active in the IPF community for a long time. How have you seen online communities help patients and caregivers with IPF?
I created the Pulmonary Fibrosis Awareness (PFA) group on Facebook initially as a memorial to my dad; just a place for my friends and family to go to remember him. It now has almost 5,000 members. I have met so many wonderful people through this group. Many who are patients and care givers. All have been affected by IPF in some way. This online group has become a community where they can share their experiences, trials and tribulations. A lot of members go on there to just read about other people’s issues. We have several “regular” members that post quite often. I feel like if I hadn’t made this group, some of these members never would have met and that is so humbling to me. Having an online community really helps in this digital age because many of those struggling with IPF aren’t able to leave the house or have trouble getting around in the community, so they are able to reach out and socialize over the internet. I am proud to have helped in that way.

How do you think information sharing platforms like PatientsLikeMe benefit patients?
I think it’s a fantastic tool for those dealing with any illness to track their progress. It’s multifaceted, somewhat user friendly and very well put together over all. It’s another great outlet for those who can’t leave the house due to their illnesses or those who can but want to document their life.

What are some other helpful resources that you think IPF patients should know about?
There are so many communities and organizations available to IPF patients. The PFA group is partnered with the Pulmonary Fibrosis Foundation, so a lot of our members come from there and some of the members of PFA go there for resources. There’s also the Coalition for Pulmonary Fibrosis. I get a lot of newsletters from them. They were the first organization to tell me about the new drug pirfenidone when it was in its clinical trial stage and now it’s in the manufacturing stage.

What’s one thing you think every patient with IPF might not know, but should?
MAKE MEMORIES STARTING NOW! I will never be able to create memories with my dad anymore. Had I known he was going to pass so quickly, I would’ve spent more time with him, called him more etc. Each day is a gift and each day a new memory should be made. Cherish them. You never know when it’ll end.

If you’re living with IPF, find others just like you in our growing community of almost 400 IPF patients on PatientsLikeMe. Learn what they’re doing to manage their condition with symptom and treatment reports, and share your own experience with a personal health profile and in the IPF forum.