What do PatientsLikeMe members think about the Affordable Care Act?

With a new administration in Washington, the future of “Obamacare” is uncertain. So we wanted to know: What do patients think about potential changes to the Affordable Care Act (ACA)? More than 2,000 PatientsLikeMe members recently shared their thoughts in the largest patient poll on the 2010 health care law.

Previous large-scale polls about the ACA focused on the general population, rather than specifically asking people with health conditions to weigh in. But in this poll, we heard directly from 2,197 members living with a variety of conditions, including MS, fibromyalgia, Parkinson’s, depression, ALS, diabetes and cancer.

“Regardless of your political leaning, the great equalizer is that we’ll all become sick one day. At this time of uncertainty about the future of health care, listening to the voice of patients today will illuminate the path forward for all of us.”

Overall, PatientsLikeMe members have similar feelings and concerns about the ACA as the general population. But patients – who have regular, real-world health care experiences – see some benefits that the general population might have overlooked. Take a look at these snapshots of some key findings from the poll (tap each graphic for a larger view).

No go on repeal

Those who took the PatientsLikeMe poll* were more likely to oppose a repeal of the ACA than the general population**.

What should be scrapped?

How helpful is the ACA?

More than 37 percent of patients said the ACA has been “very helpful” for people with chronic conditions, while nearly 20 percent said “somewhat helpful.” Also, nearly half of patients (46%) said the ACA needs only minor modifications.

People living with major depressive disorder (MDD) as their primary condition were more likely to oppose a repeal of the ACA. The MDD community may have a stronger stance on recent health care policy because of a 2013 rule requiring insurers to cover mental health and addiction issues equally to physical health ailments.

“I think the problems with this health care program affect those individuals who are caught in the cracks … who do not make enough but do not make so little that they are covered by government programs,” said member Randy, who took the poll. “But we had these problems before the Affordable Care Act. So we need to fix [it], not take [it] away completely.”

What do you think about the ACA? Do you have a different take? Jump into the forum and keep the comments coming. Your voice – the real-world patient voice – matters.

* See the full report on the PatientsLikeMe poll. 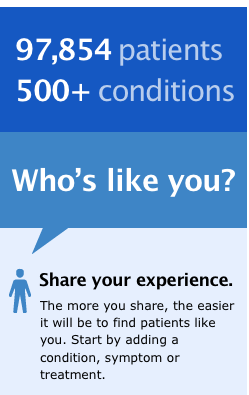 CAMBRIDGE, MA–(Marketwire – April 13, 2011) – According to a new PatientsLikeMe® Poll, almost one in three (29%) patients have withheld certain health information from their doctor. Of the 4,364 poll respondents, all of whom are members of PatientsLikeMe’s online health data-sharing community (www.patientslikeme.com), nearly half (47%) indicate that they have chosen not to share certain health information with an employer, while 14% have withheld information from insurance companies.

“Here’s a population of arguably the most open patients, who share detailed data about everything from their treatments to their sex lives on PatientsLikeMe, and yet some of these individuals feel uncomfortable sharing with other stakeholders in healthcare,” says Jamie Heywood, co-founder and chairman of PatientsLikeMe. “If we’re all going to make healthcare better, then it’s time we really understand what’s keeping patients from sharing information. That insight is crucial to improving the system.”

In their poll responses, patients also identified some of the reasons why they chose not to share their health information. Patients’ unwillingness to share certain information with doctors is driven by more emotional triggers. Almost half (44%) say they didn’t tell a doctor about something related to their health because they “didn’t want to be lectured/made to feel bad;” second to that was fear of embarrassment (36%). What aren’t they sharing with doctors? Respondents said symptoms (41%), lifestyle information such as “diet, alcohol, exercise, or smoking” (39%) and failure to take a prescribed medication (29%).

Alternatively, the majority of patients who withheld information from an employer cite more practical implications. Sixty six percent (66%) of patients indicate the top reason as being “none of their employer’s business,” but nearly half (49%) say they are afraid of losing their job and about one-third (35%) are afraid of not getting a promotion. Finally, the individuals who kept certain health information under wraps from their health insurance companies report they did so out of fear of losing coverage (39%), fear of not having a specific treatment or procedure covered (39%) or fear of premiums going up (25%).

The complete PatientsLikeMe® Poll results can be downloaded here.

NOTE TO EDITOR: All poll results must be sourced as originating from PatientsLikeMe®.

Poll Methodology
Between March 22nd and March 29th, PatientsLikeMe invited all members who had been active on the website within the past 90 days to participate in the PatientsLikeMe® Poll; 4,364 members completed the survey. Mean age of respondents was 49 years (SD 12, range 13-84).

About PatientsLikeMe
PatientsLikeMe® (www.patientslikeme.com) is the world’s leading online health data sharing platform. PatientsLikeMe® creates new knowledge by charting the real-world course of disease through the shared experiences of patients. While patients interact to help improve their outcomes, the data they provide helps researchers learn how these diseases act in the real world and accelerate the discovery of new, more effective treatments. [Follow company news on Twitter.com/PatientsLikeMe and https://blog.patientslikeme.com]