The British Royals’ passion for improving mental health is giving us all the feels — and possibly helping reduce male suicide rates in the U.K. Who’s raising awareness of men’s mental health in the U.S.? (See how PatientsLikeMe member John, pictured above, is doing his part!)

Diverging stats in the U.K. and U.S.

The U.K. has been making progress in terms of reducing male suicide rates and the stigma around men’s mental health, thanks in part to Heads Together campaign launched by Prince William, Kate Middleton and Prince Harry in 2016. Each of them have their own areas of focus in mental health advocacy.

Kate deserves credit for coming up with the idea to join forces for one major campaign, Prince William says. He and his brother have also been opening up about their grief from losing their mother during their childhood.

Unfortunately, U.S. suicide rates (among men and women) have been on the rise, according to the latest CDC report, and stigma still surrounds mental health — especially among men.

The American Psychological Association (APA) says that about 6 million American men suffer from depression every year, but men are far less likely than women to seek help for their mental health. U.S. psychology researchers are studying “how the traditional male role — which restricts emotional expression and encourages a pre-occupation with success, power and competition — is associated with negative physical and psychological consequences, such as depression, anxiety and relationship problems,” the APA says.

The National Institute of Mental Health (NIMH) launched the “Real Men. Real Depression.” campaign in 2003, and other organizations and initiatives have sprung up, including:

A few high-profile guys have also opened up recently about their mental health struggles. In May 2018, Olympic champion swimmer Michael Phelps partnered with online therapy provider Talkspace to share his story of therapy helping him through severe depression and suicidal thoughts in 2014.

“Throughout my career, I struggled with depression and anxiety at various times, and I found it so difficult to get the help I needed,” Phelps says, noting that he went for days on end without leaving his room. “As I started opening up and talking about my issues, I felt strength, not vulnerability.”

In an August 2018 Boston Globe interview, Celtics basketball player Paul Pierce said that he privately struggled with depression, anxiety and post-traumatic stress after he was stabbed in a nightclub in 2000.

John (JohnJFB126), a member of the 2016-2017 Team of Advisors, is raising his voice as a man living with major depressive disorder (MDD). He’s partnering with WebMD Education to share his perspective in an educational series aiming to help patients, caregivers and clinicians learn more about the mental health condition. John recently came to Boston to film a series of short videos for the series.

“I decided to share my experience because I know the power associated with exposure and advocacy,” John says. “As an ‘everyday’ guy, who has a wife, family and career, and who’s also had the MDD experience, it’s imperative — almost mandatory — for me to give expression to this disease. With the appropriate treatment, living with and getting through MDD is very possible. Remember you’re not alone.”

John says he hopes others will continue to open up about mental health, “especially those who have attained celebrity notoriety — their audience is usually vast, and this would place a recognizable face on the disease.”

Join PatientsLikeMe or log in to connect with thousands of others in the Mental Health forum anytime, and keep these crisis resources in mind.

One for All: The Connected Community of PatientsLikeMe 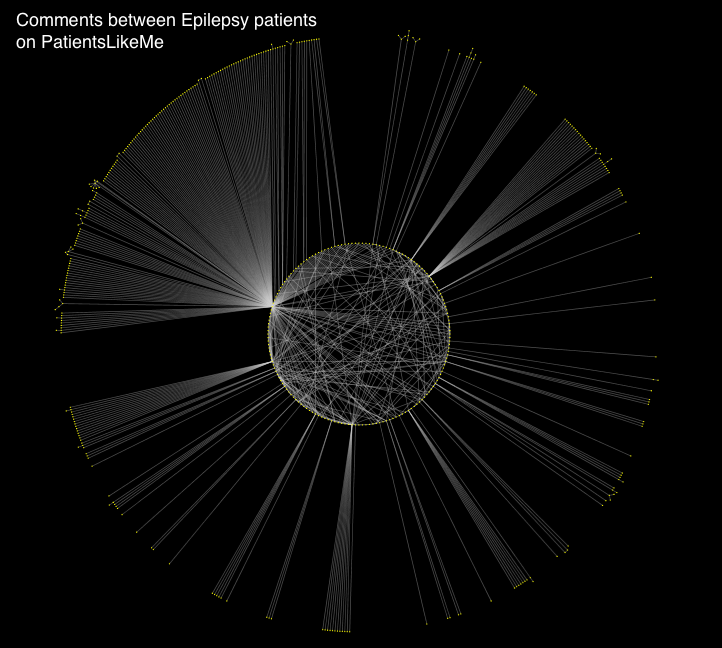 PatientsLikeMe is dedicated to building a platform for the open sharing of personal health data.  So far, our community of patients have shared over 600,000 outcome surveys, 300,000 treatment histories, and 2.3 million symptom reports.   We believe this enormous collection of health data will dramatically improve how patients manage their conditions.

But there are more benefits to joining a community of patients like those on PatientsLikeMe than just sharing data: the social support from interacting with other patients has a real effect on improving patient outcomes.  In a recent study published in the Journal for Medical Internet Research (JMIR), our research team found that nearly half of survey respondents (n = 559, 42%) agreed that the site had helped them find another patient who had helped them understand what it was like to take a specific treatment for their condition.  Furthermore, the survey shows that those patients on PatientsLikeMe who make close relationships with other members receive significantly more benefits from those who do not.

So it is worth taking a moment to look at just how extensive the social connections are on PatientsLikeMe, and how many patients have reached out to other patients and helped improve their lives.

There are many ways to connect with other patients on PatientsLikeMe, ranging from communal conversation in our forums to direct one-on-one personal messages.  While some of this dialogue is centered around sharing of health information and experiences, a part of it is purely meant as conversational discussion about everyday life.  All of these interactions are important, because they help tie a community together.  Here’s a glance at some of the ways you’ve connected:

(Note: numbers are across all communities.)

While these numbers show just how much sharing has been going on, the following graph illustrates what the connections are like between our members.  In this graph, the dots represent patients, and the lines between them connect any two patients who have shared at least 5 personal messages together.  Note how many patients are interconnected.   By reaching out to one another for support, conversation, data sharing and more, you’ve created a universe of dialogue that has never existed amongst patients like you. 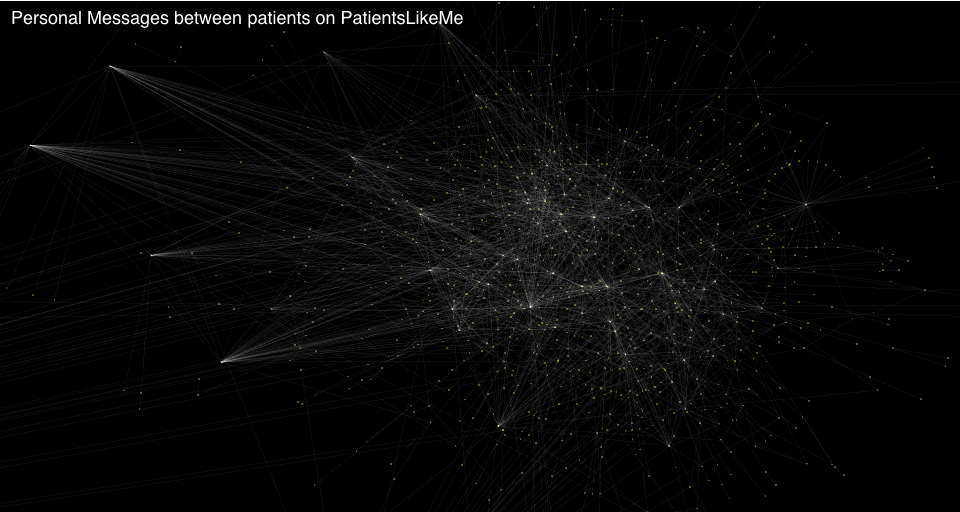 Moreover, what you’re sharing with each other through these various connections represents the largest data set of its kind linking conversations to outcomes and overall health experience. This week on the blog, we’ll delve into some of these connections that have been spurred by some of our members.  However, we also want to recognize that even the silent contributors (those connecting behind the scenes or outside of the forum spotlight) are as much to thank for this open network.  All for one and one for all.

(About the title image. This graph shows all comments made between Epilepsy patients on PatientsLikeMe. The dots represent patients, and the lines between them represent at least one comment made. Note the highly connected network of patients in the center. Click for full-sized image.)