Happy Friday! Here’s the final round of the PatientsLikeMe sleep survey infographics. On Tuesday, we shared info about general sleep issues, and on Wednesday, we learned how these problems affect the daily lives of people living with chronic conditions. Now, see how the PatientsLikeMe community compares to a study conducted by the National Sleep Foundation (NSF). Don’t forget to share your own experiences through #areyousleeping on Facebook, Twitter and Pinterest. Together, we’re learning about how sleep impacts the conditions we live with everyday, and how our health affects how we sleep. 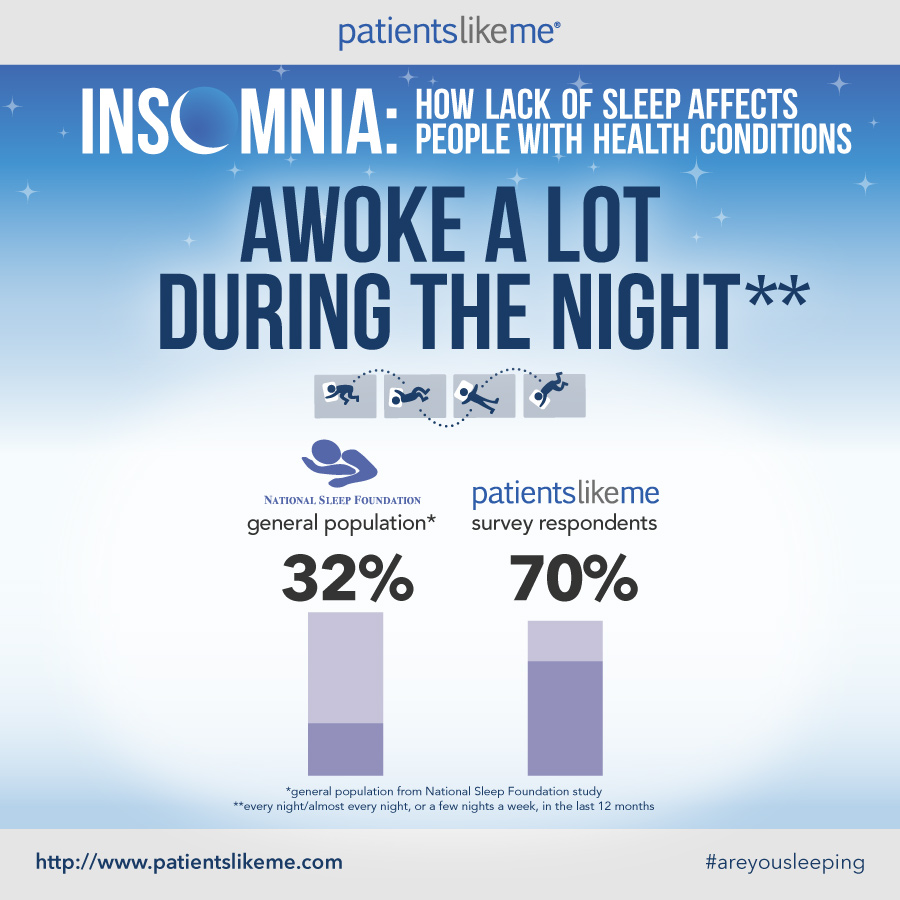 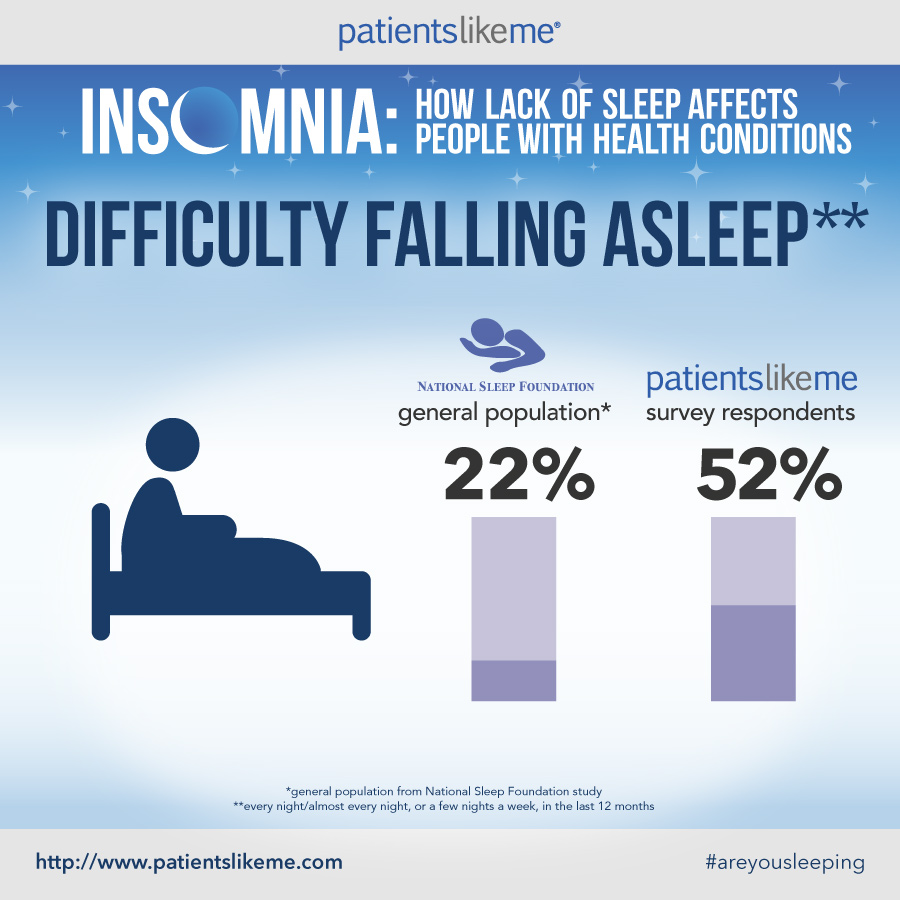 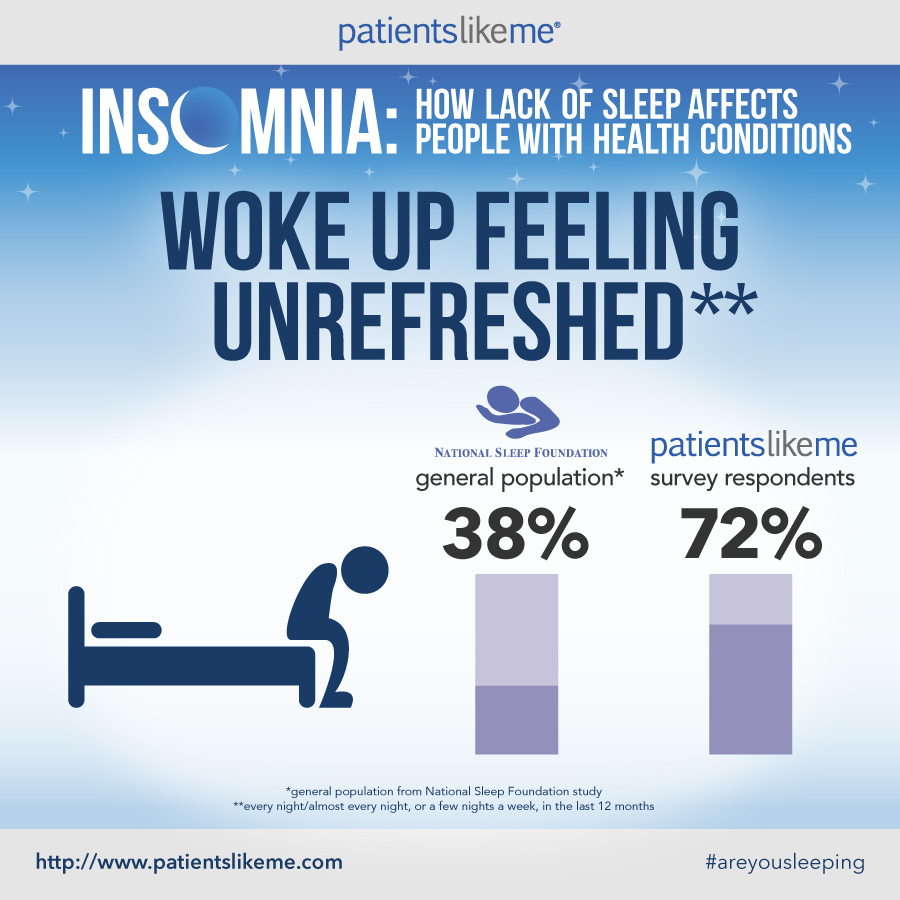 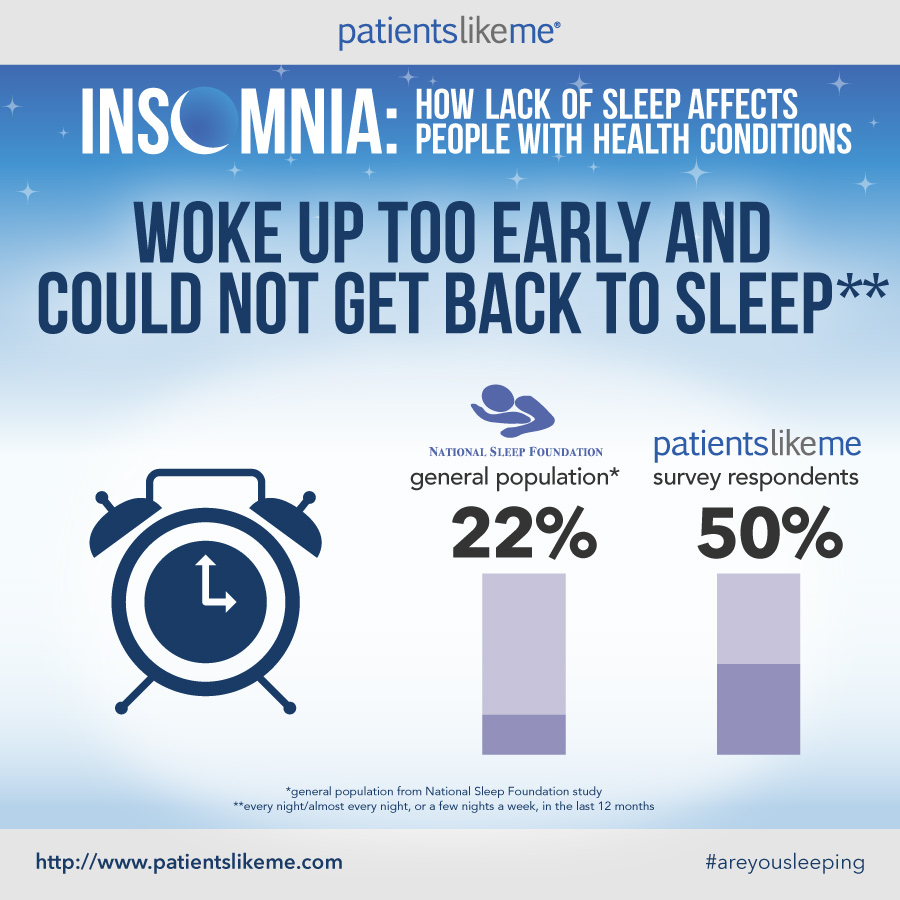 Bad night’s sleep is norm for people with health conditions, according to PatientsLikeMe survey

Majority of Members Have Chronic Sleep Problems That Point to Insomnia, But They Aren’t Diagnosed With The Condition

CAMBRIDGE, Mass.— September 23, 2013—Results from a new survey of 5,256 PatientsLikeMe members around the world reveal nearly one-third of respondents—people who live day to day with life-changing conditions—never (5%) or rarely (25%) get a good night’s sleep. Nearly half (44%) wake up a lot during the night every night, or almost every night. The survey also found that sleep problems for the group are chronic, with more than half (53%) saying their sleep problems have lasted for more than a year. Here are the survey results and graphics.

“It’s challenging enough to live with a condition that affects your day-to-day life, but now on top of that we’ve uncovered a hidden burden that has a major impact on patients’ well being,” said PatientsLikeMe Research and Development Director Paul Wicks, Ph.D. “It’s vital that patients and doctors understand how lack of sleep may affect other illnesses.”

The survey offers a rare glimpse into the sleep experiences of patients with chronic illnesses and is part of a broader study of sleep issues that PatientsLikeMe has conducted over the last five years. PatientsLikeMe has now amassed one of the largest collections of patient-specific sleep data in the world representing the experiences of 65,000 patients. Half of these patients reported having moderate to severe insomnia, which prompted the survey to deepen understanding of the relationship between sleep and other illnesses. PatientsLikeMe is continuing to analyze the complete dataset and plans other work to study how insomnia relates to specific diseases and conditions. The company expects to publish the complete findings in the future, but the survey results released today show that lack of sleep affects patients far more than the general population.

Sleep Problems vs. Insomnia
The National Sleep Foundation (NSF) says insomnia is characterized by four primary symptoms, including waking up feeling unrefreshed, difficulty falling asleep, waking in the middle of the night, or waking too early. The NSF says a person is at risk of having insomnia if they experience one or more of these symptoms on a regular basis, and if the symptoms impact their daily functioning “a lot” or “extremely.”

Only a small percentage (13%) of the PatientsLikeMe respondents said they have been diagnosed with insomnia. However, among the undiagnosed respondents (n = 4,048), 73% reported they had the symptoms that indicated they are at risk of having insomnia.

Sleep in the U.S.
In a 2005 study of adult sleep habits and styles, the NSF surveyed 1,506 people in the U.S. about their experiences with the four symptoms of insomnia. Based on the NSF definition, results from PatientsLikeMe survey respondents in the U.S. (n=3,284) show that members are almost nine times more likely to be at risk of having insomnia than the general adult population. They also show that PatientsLikeMe members with health conditions experience any one of the four symptoms of insomnia at twice the rate of the general adult population.

Sleep Affects it All: Driving, Relationships and Sex
As part of a series of questions on the impact of sleep on their emotional, physical and social well-being, respondents answered questions about topics such as driving, relationships and sex.

In the survey, people who reported at least a mild sleep problem (n=3,975) were asked how it affects their driving. Of the 81% who drive, 36% have felt drowsy either sometimes, often (10%) or very often (7%) while driving; approximately one out of three (31%) admitted to nodding off or falling asleep at least once while driving because of their sleep problem.

Regarding relationships, 61% of respondents who experience sleep problems said their workmates, family or friends would describe them as “a bit” or “super” irritable; 21% say they’d be perceived as “irritable as usual.”

When the questions got more intimate, two thirds of the respondents with at least mild sleep problems answered how lack of sleep affects their sex life. Of those, one third (32%) said their sex life is negatively affected by their sleep problems, while 27% said it’s the same. Just 17 people, or 0.43%, reported an improvement. The rest answered not applicable, or didn’t want to say.