In the market to live better: ALS members weigh in

Over the years, the PatientsLikeMe ALS community has shared what products help them manage their new normal with ALS. From eye-gaze devices to elevated toilet seats and alternating pressure mattresses, we compiled a list of some of the products that you, the experts, are talking about in the forum. Check it out:

When it gets difficult to turn over, members mentioned:

And, other communication devices:

When transferring to and from the toilet gets tough, members mention:

What products help you? In the market for something specific? Head to the forum – the community might have a recommendation.

For an ALS patient, an eye gaze system – a type of augmentative speech device that translates eye movements into words – can make it possible to communicate with loved ones when speech is impaired or lost.  But as animation studio owner Mick Ebeling found out, not every patient with advanced ALS has one.  The problem?  They’re big and expensive, and in many cases, US health insurers won’t cover them.

This discovery came about when Ebeling learned about a legendary Los Angeles graffiti artist named Tony “TEMPT ONE” Quan (whose “tag” is shown above), who was diagnosed with ALS at age 34.  Quan’s family told him that they were only able to communicate with their completely paralyzed son through spelling out words.  Shocked, Ebeling decided he had to help.  “There are certain inalienable rights that people are entitled to, and I think being able to express yourself is one of them,” says Ebeling, who now gives TED talks (see video below) about this unexpected calling.

First, Ebeling convinced Quan’s insurer to cover an eye gaze system so that the talented artist could “speak” again.  But he didn’t stop there.  He wanted Quan to not only be able to communicate but to draw, so that he could continue his career.  So Ebeling founded the Not Impossible Foundation and enlisted the help of programmers and open source activists in creating a low-cost, open-access writing and drawing device for paralyzed patients.  Despite having no background in ocular recognition, they pulled it off. 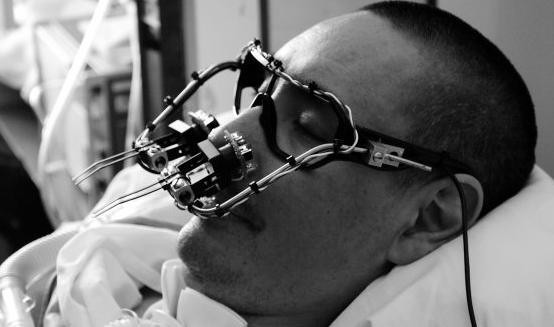 Named one of the top 50 inventions of 2010 by Time, the brilliantly simple EyeWriter device can be made for less than $50.  It involves a pair of sunglasses, IR LED lights, copper wire and a PC webcam.  There’s no technology component that can’t be found at Home Depot or Radio Shack, and that’s the point.  With free open-source software that can be downloaded online, the DIY EyeWriter is a device almost anyone can build and use.  (Download the instructions here.)

“We’ve created a device that has absolutely no limitations,” says Ebeling.  “There’s no insurance company that can say ‘no.’ There’s no hospital that can say ‘no.’ Anybody who’s paralyzed now has access to draw or communicate using only their eyes.”  Case in point:  in April 2009, Quan was able to create a completely new 10-story mural using only his eyes.  Two years later, his post-ALS artwork appeared alongside famous street artists Banksy and Shepard Fairey in a MOCA exhibit.

This amazing story of inspiration and ingenuity has now been turned into a documentary entitled Getting Up: The TEMPT ONE Story.  Directed by Ebeling’s wife Caskey, the film won the Audience Award for Best Feature Documentary at the 2012 Slamdance Film Festival.  Check out the trailer below and read what this husband-wife team think are the universal lessons from their EyeWriter journey.