One for All: The Road Ahead with PatientsLikeMeInMotion™

This Spring, as you’re out at disease-related fundraiser events, take note of the people in those bright blue t-shirts walking, running or biking by your side. Those are patients like you!

Since its launch in 2009, more than 1,700 people (including patients, friends and family members) have taken part in the PatientsLikeMeInMotion™ program to raise money and awareness for various conditions. Here are some fun facts about PatientsLikeMeInMotion and a video of some of our members who have participated.

A few weeks ago, I was invited to present on behalf of PatientsLikeMe at the Arthritis Foundation workshop held in Newport, RI.  The presentation was on how to “harness new media for patient advocacy” – the same as what I presented at a workshop for non-profits in northern New England in August.  This time the audience included non-profits in the southern half of New England.  Among those in attendance were representatives from organizations that mean a lot to us, and our patient communities, including regional branches of the American Parkinson’s Disease Association, CFIDS & FM Association, and the Epilepsy Foundation. 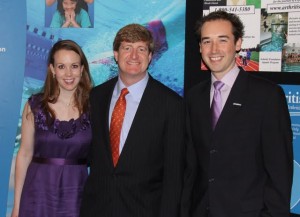 One of the highlights for attendees was an impassioned keynote speech by Rep. Patrick Kennedy (pictured above with me and my wife Emma) who advocated the use of the web to support mass organization of patients with serious and chronic illnesses to accelerate research and improve standards of care. We couldn’t agree more.  It’s exciting and validating to know influential decision-makers are recognizing the potential of communities like PatientsLikeMe.