The Patient Voice | Episode 3: When a Community “Becomes Family”

“I’ve met a lot of people from all over the world,
we are all one happy family.” – Vigwig

Around and around we go, strap on in for Episode 3 of our podcast series, “The Patient Voice.”   To continue with the PatientsLikeMe Parkinson’s Disease (PD) quilt story, our guest today is community member VigWig. A few years back, VigWig underwent surgery for DBS (Deep Brain Stimulation). As word spread throughout the 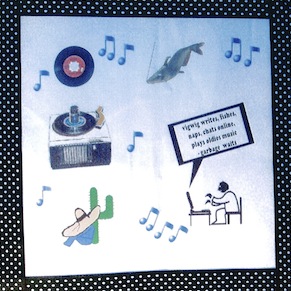 community, Vigwig’s online friends arranged for the quilt to be there waiting for him when he returned to his room from surgery.

Inspired by his Parkinson’s “family” (as he calls them), VigWig plays a more active role in the PatientsLikeMe PD community, and in raising awareness about PD. His story was published in the The Courier of Montgomery County, and VigWig submitted quilt patches to Parkinson’s Quilt Project (coordinated by the Parkinson’s Disease Foundation and displayed at the World Parkinson’s Congress). An honest-to-goodness story about an online “family” rallying together to support one of their own…here is our interview with VigWig.

It’s Parkinson’s Awareness Month. As we continue to spread the word about this condition, we wanted to tell you a little bit more about our PatientsLikeMe Parkinson’s community. Launched two years ago this month, the community has steadily grown to include more than 3,400 patients. Below are some interesting facts about the community, as well as an interview with one of our members (“PokieToo”) giving her real-world experience of living with condition.

WHAT’S IT LIKE LIVING WITH PARKINSON’S DISEASE (PD)?
Meet PokieToo.  A long-time member of our PD community, she tells us how she continues to “look for the sunshine” while “taking 30 pills a day.”   “Out there for the next person,” PokieToo gives us a glimpse of the real-world experiences of living with Parkinson’s disease.

DID YOU ALSO KNOW…