CAMBRIDGE, MA – November 22, 2011 – According to a recent PatientsLikeMe® Poll, one out of every two type 2 diabetes patients (50%) and nearly two out of every three type 1 diabetes patients (65%) say having diabetes affects their holidays.  More than half of respondents (59%) say the upcoming holiday season, marked by Thanksgiving and Christmas, is most difficult for controlling blood glucose; 25% don’t find the holidays difficult.  When asked what strategies they use if their blood glucose rises after increased consumption during the holiday, diabetes patients had mixed responses with three in four type 1 patients (76%) changing their medication dosage, while type 2 patients try alternative things like more exercise (34%) or just avoiding glucose-raising items altogether (34%).  Two hundred and twenty-six (226) diabetes patients sharing their health data on PatientsLikeMe.com responded to the poll. 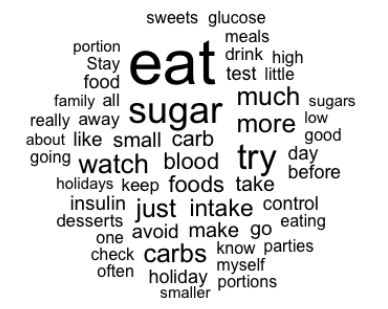 “This week represents the beginning of a challenging season for diabetes patients faced with group meals and gatherings that could impact their health,” says Ben Heywood, President and Co-founder of PatientsLikeMe.  “We all have family or friends with diabetes and these poll results give a glimpse into some of the challenges they face and the strategies they use to overcome them.”

Are diabetes patients sensitive about discussing their disease with family and friends at the table during the holidays? An overwhelming 90% say no.  However, more than one in three patients (38%) still feel friends and family don’t understand how diabetes affects them during the holidays.  With holiday meals and parties so prevalent over the next six weeks, many of the respondents (84%) say they manage with what’s available, while 16% make some adjustment to accommodate for their diabetes (7% host to be in control, 7% eat before going out and 2% bring their own meal).

PatientsLikeMe will introduce a daily blood glucose monitoring feature for its 2,000+ diabetes patients in early December. Patients will be able to report daily glucose levels, as well as continue sharing and learning from HbA1c scores (used to monitor the glucose control of diabetics over time), treatments and dosages (such as Metformin or insulin) and symptoms and severity (including blurry vision, excessive thirst and fatigue).  In recognition of Diabetes Awareness Month, PatientsLikeMe recently collaborated with industry and nonprofit partners to launch the CallingAllTypes (www.callingalltypes.com) campaign in an effort to help raise awareness and funds for the disease.

PatientsLikeMe® Poll Methodology
Between November 14th and November 18th, PatientsLikeMe invited all diabetes members to participate in the PatientsLikeMe® Poll, with 226 members completing the poll. Respondents represent patients with both type 1 diabetes (24%), where patients are usually diagnosed at a young age and need to daily blood glucose monitoring and insulin therapy, and type 2 diabetes (73%), where patients develop the condition gradually over time typically due to environmental factors resulting in increased blood glucose levels. In this poll, more than 200 respondents shared their HbA1c scores, with 49% reporting a score of 7.0 or lower (which represents well-controlled glucose).

About PatientsLikeMe®
PatientsLikeMe® (www.patientslikeme.com) is the world’s leading online health data sharing platform. PatientsLikeMe® creates new knowledge by charting the real-world course of disease through the shared experiences of patients. While patients interact to help improve their outcomes, the data they provide helps researchers learn how these diseases act in the real world and accelerate the discovery of new, more effective treatments. [Follow company news on www.twitter.com/PatientsLikeMe and https://blog.patientslikeme.com]

Today is World Diabetes Day, sponsored by the International Diabetes Federation.  An official United Nations Day since 2007, World Diabetes Day is held every year on November 14th to commemorate the birthday of Frederick Banning.  Along with Charles Best, Banning is credited with the life-saving discovery of insulin in 1922.

Why is there a need for a global diabetes day?  As the United Nations wrote in their 2007 resolution, diabetes is “a chronic, debilitating and costly disease associated with major complications that pose severe risks for families, countries and the entire world.”  Namely, it is the cause of four million deaths worldwide every year, with someone dying every eight seconds from the disease.

The global symbol for diabetes awareness is a blue circle, and supporters everywhere are encouraged to wear blue today to help spread the word about this pandemic.  You can also help get the message out about prevention.  While type 1 diabetes cannot be prevented, research shows that, in many cases, type 2 diabetes can be prevented by maintaining a healthy weight and being physically active.  Regular walking for at least 30 minutes per day, for example, has been shown to reduce the risk of type 2 diabetes by 35-40%.

We recently highlighted type 1 diabetes (and how it differs from type 2) in our blog post, “American Diabetes Month Kicks Off with T1 Day,” as well as our two-part interview with type 1 patient Michael Burke.  Here’s a little more information about type 2 diabetes, which accounts for at least 90% of all diabetes cases worldwide.  At PatientsLikeMe, 1,773 patients report type 2 diabetes, with 68% of them female and 32% male.  One of the most commonly reported treatments is Metformin, an oral anti-diabetic medication prescribed when hyperglycemia (high blood sugar) due to diabetes cannot be controlled through exercise and diet alone.  What do patients say about this drug?  Check out the 125 treatment evaluations submitted by our members, who share their experiences with dosage, side effects, efficacy, cost and more.

With a staggering 366 million people diagnosed with diabetes worldwide – and another 300 million at risk – it’s imperative that diabetes awareness and knowledge grow faster than the disease itself.  The new “Calling All Types” diabetes awareness campaign – an initiative of PatientsLikeMe and our partner BBK Worldwide – helped mark World Diabetes Day this past weekend at the Diabetes University 2011 event in Atlanta, Georgia.  Now in its 18th year, this event works to educate both medical professionals and the public.  Given that the prevalence of diabetes in Atlanta is a full point higher than the national average, Calling All Types has made Atlanta the focal point of the campaign’s initial awareness-raising activities.

Are you a type 1 or type 2 diabetes patient?  Share your story at CallingAllTypes.com in honor of World Diabetes Day.  For everyone else, “act now” by wearing blue, talking about type 2 diabetes prevention or simply taking a walk around your neighborhood.