BRUSSELS, BELGIUM and CAMBRIDGE, MA–(Marketwire – April 12, 2011) – In a survey amongst people with epilepsy in the U.S. who have joined PatientsLikeMe®, th 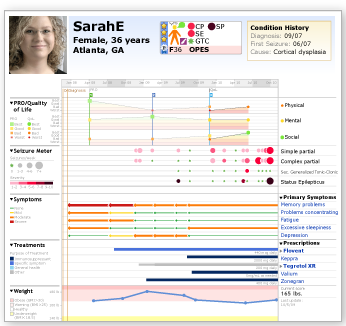 e leading health data-sharing website for patients, respondents indicate that better seizure understanding and improved adherence are key benefits of using the site. The majority of respondents (55%) indicate a better understanding of their seizures, while one in four (27%) report improved adherence to treatment as a result of joining the PatientsLikeMe epilepsy community. When asked about their social interactions with other patients, one in three respondents (30%) said they did not know a single other person with epilepsy before joining the site; 63% of these said they were now communicating with one or more patients on the site.

The complete results from this survey of 221 epilepsy patients are being presented this week at the annual meeting of the American Academy of Neurology, in Hawaii, U.S. (April 9th-16th). In early 2010, PatientsLikeMe and UCB first invited U.S. epilepsy patients to share their seizure experiences, symptoms and treatments through the website; there are more than 3,600 members to date. UCB receives annonymized, aggregated data from the PatientsLikeMe epilepsy community…. >> Click here to see the full news release.