Four years ago this Spring, PatientsLikeMe launched the ALS community with very specific goals in mind – to help patients like you take control of your disease, share and learn from one another, have a voice in real-world research and inform the companies that make your drugs and can improve your care.  Together, we have come so far as a community in making those goals, those dreams happen.  Today, to close out ALS Awareness Month, we want to honor that journey by highlighting some of the milestones you as a community have achieved.

As many of you know, the journey started when PatientsLikeMe was inspir 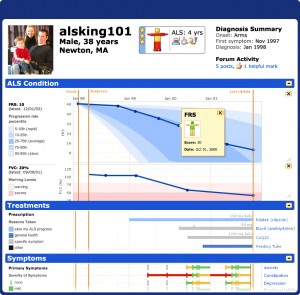 ed by Stephen Heywood, a young man diagnosed with ALS when he was only 29 years old. His brothers Jamie and Ben, and long-time friend Jeff Cole, built PatientsLikeMe and its flagship ALS community to help Stephen and other patients like him. After four years since launching the ALS community, more than 4,500 of you – our PALS – are still sharing your data and experiences to help others. Along the way, we’ve lost some of our friends, including Stephen, but their contributions live on in the data they’ve shared with us to help further the understanding of this disease.  Jamie recently said it this way: “the desire is that this disease should no longer kill, but we do our best to help people live with it today.”

Thank you for living with it today and sharing those experiences with your fellow PALS, industry, researchers…all of us.  You are truly making a difference.

3 thoughts on “ALS Awareness 2010: A Four Year Journey With Our PALS”