We’ve written about how smoking is the single largest preventable cause of disease and premature death in the US.  We’ve also highlighted some of the treatments that our 4,000+ members who report tobacco addiction have tried in their quest to quit. 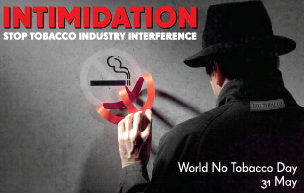 But today, in honor of World No Tobacco Day, we’d like to focus on the global consequences of secondhand smoke, or the smoke that fills restaurants, offices, homes and other enclosed spaces when people burn tobacco products.  Given that there are one billion smokers around the world, secondhand smoke (also known as “passive smoking”) has become a serious public health issue.

How serious?  Deadly serious.  Here are ten hard-hitting facts from the World Health Organization (WHO), the sponsor of World No Tobacco Day.

Want to show your support for World No Tobacco Day?  Join the cause on Facebook.  If you live in the US, you can also check this map to see your state or city’s laws regarding smoking in restaurants, bars and workplaces.