As the weather gets colder and days become shorter, you may notice you have less energy, feel a little less optimistic and spend more time alone. While this may not be a cause for concern, about 5% of the U.S population experience seasonal depression during the fall and winter months.

Seasonal depression, or seasonal affective disorder (SAD), is a subtype of depression that begins and ends around the same time every year. This recurrent pattern generally begins in the fall or early winter months and ends around springtime, lasting about four to five months per year. This is known as winter-pattern SAD or winter depression. For people in the United States, the most difficult months tend to be January and February.

Many people get a mild version of SAD known as the “winter blues.” As much as 20% of the population may get the winter blues, which is usually linked to something specific, such as holiday stress or grief over missing loved ones. The winter blues isn’t a medical diagnosis and usually goes away on its own after a few weeks or months.

Some people might have depressive episodes during the spring and summer. This is known as summer-pattern SAD or summer depression, which affects about 10% of the population.

Although the exact cause of SAD is unknown, it has been linked to a chemical imbalance in the brain prompted by shorter daylight hours and less sunlight in the wintertime. The main theory is that the lack of sunlight stops the hypothalamus from working properly. The hypothalamus is the part of the brain that maintains your body’s internal balance, called homeostasis. It does this by stimulating or inhibiting many of the body’s essential processes, including sleep cycles and production of substances that influence the pituitary gland to release hormones. 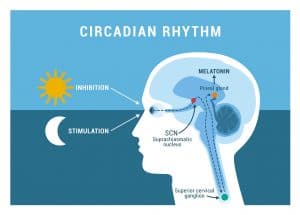 People with SAD also have trouble regulating serotonin, a brain chemical responsible for balancing mood. In one study, people with SAD had 5% more serotonin reuptake transporter (SERT) in the winter months than in the summer. SERT transports serotonin from the synaptic cleft to the presynaptic neuron. The synaptic cleft is a space that separates two neurons (the post- and pre-synaptic neurons) that helps nerve impulses pass from one neuron to the other. Higher levels of SERT lead to lower serotonin activity, causing depression. During the summertime, sunlight usually keeps SERT levels low, but when sunlight decreases in the fall and winter, there is a corresponding decrease in serotonin activity.

When a decrease in serotonin and an increase in melatonin are combined, it can disrupt circadian rhythms. Circadian rhythms are 24-hour cycles that are part of the body’s internal clock. They respond primarily to light and dark and are connected to a “master clock” located in the suprachiasmatic nucleus within the hypothalamus.

Wintertime also means less outdoor exposure to sunlight on the skin. People with SAD may produce less vitamin D, which is believed to play a role in serotonin activity. Both vitamin D deficiency and sufficiency have been associated with clinically significant depressive symptoms, but causal links between serotonin, melatonin, vitamin D, circadian rhythms, and SAD have not been confirmed.

What are the symptoms of seasonal depression?

People with SAD experience mood changes and symptoms similar to those of depression. The symptoms can range from mild to severe.

Winter-pattern SAD has additional symptoms, including:

The key to receiving an accurate diagnosis of SAD is recognizing the recurrent pattern. Some people with SAD may start to experience a “slump” as early as August, while others won’t notice any symptoms until January. Generally, people with SAD don’t start to feel “normal” until May.

To meet the DSM-5 diagnostic criteria for major depressive disorder with seasonal pattern, depression must be present during a specific season every year with full remittance during other seasons for at least two years, and with more seasons of depression than seasons without depression over a lifetime. While you won’t get a diagnosis of seasonal affective disorder the first time you experience symptoms, it’s important to pay attention to and track the pattern.

Who is at risk for seasonal depression?

How to manage seasonal depression

If you have seasonal depression, there are a few ways you can manage your symptoms.

Since light plays such a primary role in seasonal depression, one treatment that can help is light therapy. It is often the first treatment recommended for SAD and is meant to replace the missing daylight hours with an artificial substitute. These lights are about 20 times brighter than regular indoor lights and filter out potentially damaging UV light. 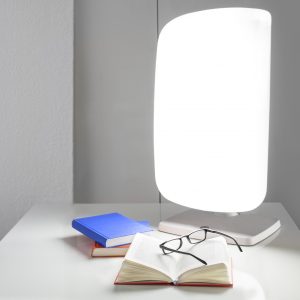 During light therapy, patients will sit near a device called a light therapy box or lamp that gives off a light that mimics outdoor light. Patients sit in front of the light box every morning for 30 minutes or more, usually first thing in the morning after waking up. You may use it for up to two hours per day depending on the intensity of the light and how long you have been using light therapy. The light should reach your eyes, but do not stare directly at the light box.

Light therapy is thought to affect brain chemicals that are linked to mood and sleep such as melatonin and serotonin. Light boxes are safe, effective, and available to buy without a prescription, although your doctor may recommend a specific box. The most common side effects of light therapy are headache, eye strain, and nausea. You might be more tired than usual during your first week of light therapy because it is changing your sleep-wake patterns, but the tiredness should start to improve in the second week.

Sunlight is the main source of vitamin D, which can help with managing the symptoms of SAD. Although there isn’t as much sunlight during the fall and winter as there is during the spring and summer, it is still possible to get some sun exposure. Weather permitting, you can spend time outdoors or arrange your home or office so that you can get some sunlight through a window during the daytime.

Since SAD is a type of depression that is associated with disruptions in serotonin activity, antidepressants called selective serotonin reuptake inhibitors (SSRIs) can be used to treat the symptoms. SSRIs increase the levels of serotonin in the brain and block the absorption (reuptake) of the chemical into neurons. Another type of antidepressant that may be prescribed for SAD is bupropion. It works by inhibiting the reuptake of dopamine, norepinephrine, and serotonin.

Also known as talk therapy, psychotherapy is a general term for treating mental health problems by working with a mental health professional, such as a psychiatrist or psychologist. It can be used alone or in conjunction with medications or other treatments.

Cognitive behavioral therapy (CBT) is an evidence-based psychological treatment that has been demonstrated to be effective for a range of problems, such as depression, anxiety, and substance use. Research studies have shown that CBT can lead to significant improvements in functioning and quality of life. Advances in CBT have been made based on research and clinical practice, and there is ample evidence that CBT methods can produce change.

A form of CBT that has been adapted for people with SAD, known as CBT-SAD, relies on the basic techniques of CBT and focuses on helping patients replace negative thoughts about winter with positive thoughts. CBT-SAD also uses behavioral activation to help patients identify and schedule pleasant indoor or outdoor activities to cope with the wintertime.

Talk to your doctor about which treatment or combination of treatments will work best for you. It usually takes at least four weeks to start seeing improvements, so don’t get discouraged if you don’t experience improvements right away. If you start feeling worse or experience any side effects, be sure to consult with your doctor.

Get the support you need

If you are struggling with seasonal depression, know that you’re not alone. At PatientsLikeMe, there are over 17,000 members who are also living with SAD. Join them today to learn how they are managing their symptoms and  get the support you need.