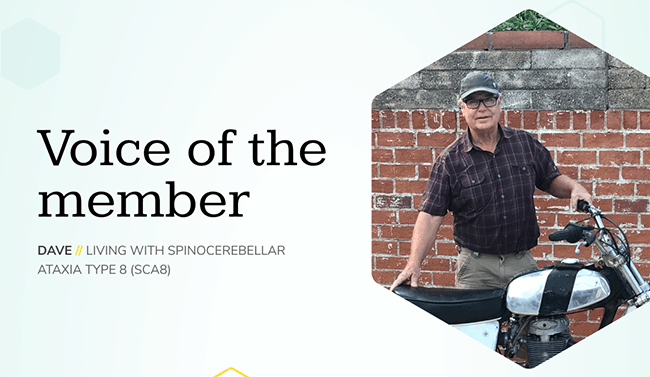 Dave, a retired attorney, and avid mountain biker was riding in the car with his wife when he felt very dizzy, asked her to pull over, and collapsed on the side of the road in 2005. This incident sparked many subsequent trips to the emergency room and meetings with neurologists and other specialists to get to the bottom of Dave’s health concerns, which included cognitive decline and issues with mobility and balance. Initially, doctors were very perplexed and thought he had caught an infectious disease from recent international travel or even had early multiple sclerosis (MS) symptoms. A visit to a hospital in New Mexico and many genetic tests later concluded the diagnosis of Spinocerebellar ataxia type 8 (SCA8), a neurodegenerative condition characterized by slow-progressing problems with movement, balance, and coordination.

SCA8 is a rare disease that was only discovered in 2000. The fact that it had only been identified for about five years at the point of Dave’s incident meant that he had a long road of learning ahead. He often found his doctors understanding the science behind his condition, but not having the experience to truly understand what was going on. With a condition as rare as Dave’s, many of the manifestations are still unknown. Dave recalls experiencing this many times, but when he would tell his provider what he was experiencing, some would say that his symptoms weren’t typically associated with the condition, only to find that years later, the same symptoms were in fact identified as a common characteristic. Dave reminds other patients that they shouldn’t feel discouraged if they have these same experiences because sometimes science just needs to catch up with patients. The good news is that there is a forum for patients to share their challenges and certain aspects of rare conditions. Enter PatientsLikeMe (PLM).

Back in the Saddle: Seeking Support Post-Diagnosis

Dave says he was “the luckiest guy in the world” for the opportunity to be connected with his trainer in New Mexico. She works with chronically ill to terminally ill patients to improve their quality of life and has helped him manage his SCA8 for about 15 years now. He hasn’t been hospitalized since he started his therapy and credits his success to working with her (even via Zoom to this day). Dave stopped biking when he started to experience symptoms. Upon receiving his diagnosis, he was worried that he would have to pump the brakes on his passion for biking, but she pushed him to get back on the bike even though he didn’t think it was possible. Dave took her advice to heart and has even tackled longer rides, traveling from San Francisco to Phoenix. He says that there’s something about the process of getting ready for that type of ride that helps manage his neurological condition. Dave believes that getting ready for longer rides creates something to look forward to, a goal to work toward, and hope, all things that are extremely important.

“Many people see their disability as an excuse and then waste their life on the couch. This isn’t a dress rehearsal, it is our life and it is way too short. No matter what our disability is, we can do much more than we will ever realize. So being positive, getting out on a limb, and really living life is extremely important. It doesn’t have to cost a lot of money. You don’t need special clothes or high-dollar equipment, you just have to do it.”

Being diagnosed with a rare disease can also be isolating and some support groups can feel gloomy, which is what ultimately brought Dave to PLM. He’s found other users that talk about the tough times without too much negativity, sharing what’s worked and what hasn’t on their own health journey. When he first began seeking online resources, Dave had difficulty finding anything on his condition. Now he’s helping to contribute data that will eventually help other patients. He’s grateful that it has come full circle and gives users a chance to manage chronic illnesses in new ways.

Dave leans on PatientsLikeMe tools, such as the “Daily Check-in,” because they help him track his own progress while collecting data that might help researchers identify condition-related patterns. These findings could lead to better treatment for SCA8 later on. He’s also been able to learn from shared challenges from other patients, which ultimately lead him to try alternative pain management options to help with cramps, and the suggestion to switch to a gluten-free diet, helping him become pain-free. As he states: “These changes are possible to improve your quality of life, but nobody can make them for you.”

“On the PatientsLikeMe platform, we share what we are going through, and someone newly diagnosed can access that and see what works for us and what doesn’t. We share how we live life to maximize our functionality. A community that supports each other and shares experience while at the same time collecting data that will help researchers identify characteristics of various conditions without having to get grants. This is a great idea.”

One Small Thing: Mentality Makes All the Difference

Dave has always liked a challenge, from motorcycle racing in his youth and sailboat racing up to the onset of his symptoms and long cycling trips. He also enjoyed the challenges of litigation. When Dave decided to go to law school, he had no money and lived on a tiny sailboat because he couldn’t afford rent, but he kept showing up and got through because he believed he was doing the right thing. He didn’t have a car, just a bike. Little did he know how important cycling would become for his physical and mental health down the road. Dave eventually started his legal career working in family court, where he saw many people who were suffering. All of his life experiences have taught him that he can do insurmountable things just by taking that first small step toward positivity and managing expectations that things won’t just happen and get better overnight. He strongly believes that there is always a way if you are willing to find it and do it. 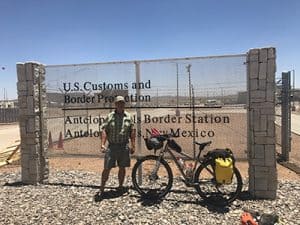 Over the years, Dave’s approach to his career has carried over to his personal health. As Dave’s condition progresses, he is constantly adapting and reminds other patients to be nimble and embrace change. Being productive is a big part of a meaningful life, so he recommends doing whatever you can to push yourself every day, either mentally and physically. He realized that while most people tend to look at this type of diagnosis with negativity, having a disability in some sense has been a blessing for him. It forced him to step back from work and focus on what really mattered most. He believes sitting around in self-pity is “a recipe for disaster” and recommends approaching diagnosis with positivity, getting fresh air, and keeping moving. According to Dave, “It can help change your whole world.”

“My disability doesn’t define me. It is more of an inconvenience than anything else, but it is also an opportunity to be the best person you can be and happiness is a byproduct of that effort. Don’t let your disability hold you back. Disabilities are just expressions of the diversity of human experience – there is so much more within our reach. If you don’t like the quality of your life, you’re the one that has to do it – everyone’s journey is different, but all are wonderful.”