Multiple sclerosis can be one of the most difficult conditions to diagnose because of the variety of symptoms it causes and the ways they present. Most people with MS experience their first symptoms between the ages of 20 and 40. Sometimes, symptoms can come on suddenly and go away just as quickly. Other times, symptoms will start minimally and progressively get worse. Because MS effects everyone differently, the early warning signs for one person may not be the same as they are for someone else.

Many people with MS experience common symptoms like numbness or tingling, muscle weakness, or changes in gait. Other common symptoms of MS include fatigue, bladder problems, and “MS hug.” Although there are other warning signs to look out for, it’s important to recognize that having one or all of them doesn’t mean you have MS. If your body attacks your nervous system just once, and the symptoms last for at least 24 hours, but other conditions have been ruled, your doctor will likely diagnose you with clinically isolated syndrome (CIS). While CIS can develop into multiple sclerosis, that isn’t always the case.

Here are some early warning signs of multiple sclerosis to look out for.

Tremor is commonly associated with Parkinson’s disease, but some people with multiple sclerosis may experience tremors too. Both diseases affect the central nervous system, but they have different causes. MS is caused by damage to the myelin sheath that forms around nerve fibers, while Parkinson’s is caused by nerve damage to nerve cells in the substantia nigra. According to experts, 25 to 60% of MS patients experience tremors which usually affects one limb.

The type of tremor that is typically seen with MS is known as “intention tremor.” This type of tremor is greatest when there is physical movement, such as reaching for an object or moving a hand or foot to a certain spot. Some people with MS may get resting tremor—tremor that occurs when there is no movement—but it may happen more often at night than during the day. However, resting tremor is more common in Parkinson’s disease than MS.

Pruritis (itching) is a form of dysesthesias, which means “abnormal sensation.” It may feel like a painful burning, prickling, pins and needles, or an aching feeling. It can also feel like an unpleasant sensation that provokes the need to scratch. The difference between this kind of itch and a regular itch is that the feeling doesn’t go away with scratching. This happens because the nerves are affected, not the skin. For some people this itching feeling might feel more like an annoyance and is usually brief. For others, it can be very intense, and it may happen on both sides of the body.

Another characteristic of this type of itchiness is that it occurs in the same location on both sides of the body. Neuropathic itchiness that occurs with MS usually occurs in specific areas rather than all over the body.

A rare symptom of multiple sclerosis is trigeminal neuralgia (TN). Trigeminal neuralgia is chronic nerve pain condition that affects the 5th cranial nerve, one of the most widely distributed nerves in the head. The pain is often felt on one side of the face, usually in the cheek or jaw, but can extend towards the eye, ear, forehead or inside of the mouth. Pain can vary and make be a sudden, more severe stabbing sensation or a more constant aching and burning sensation. Trigeminal neuralgia effects about 4 to 6% of people with MS and the longer you have MS, the more likely you are to develop it. 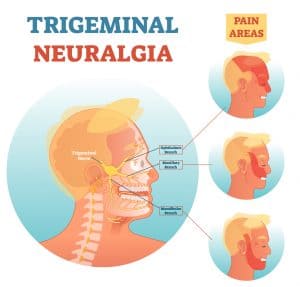 Trigeminal neuralgia attacks usually occur in quick succession that last from a few seconds to a few minutes. While the attacks often stop for a period of time and then return, trigeminal neuralgia can be progressive and worsen over time. As the condition progresses, there are fewer and shorter pain-free periods between attacks and eventually, the pain-free periods disappear completely.

Trigeminal neuralgia is caused by damage to the trigeminal nerve. Damage is usually caused by a nearby blood vessel pressing on part of the nerve inside the skull and as time continues, the compression wears at the myelin sheath that protects the nerve. An MRI can determine if the pain being experienced is caused by TN or MS, or both.

Dizziness is a common symptom of multiple sclerosis. Some people with MS may feel off balance or lightheaded, but in rare cases, MS may cause the sensation that you or your surroundings are spinning. This is known as vertigo, which can occur even when you’re not moving. About a third of people with MS experience dizziness or vertigo at some point and it’s common for a bout of vertigo to be caused by an MS flare-up.

Because of the lesions that result from MS, the nerves within the central nervous system are unable to send messages to the rest of the body. The location of the legion determines the symptoms. Lesions in the brain stem, which is the area of the brain that controls balance, can cause vertigo. Over-the-counter anti-motion sickness medications can help if the vertigo is acute, but if it becomes chronic, your doctor may prescribe a stronger medication.

Cognitive changes are a common symptom of MS and the most common cognitive issue for people with MS is mild to moderate memory impairment. People with MS who are usually good at remembering things might suddenly become forgetful or have trouble concentrating and paying attention.

Hot feet can be a warning sign of MS. With MS, you might feel like your feet are hot even though they feel normal when you touch them. Like pruritis, there may be some differences in how you experience the feeling of hot feet, such as:

The feeling of hot feet might occur spontaneously or may be triggered by a certain action, such as putting on a shoe or sock. Like many other symptoms of MS, this type of dysesthesia can be caused by other conditions so your doctor will have to rule out other causes to determine whether or not it’s related to MS.

At least half of people with MS will experience optic neuritis, which is when the optic nerve that connects the eye to the brain gets inflamed. Although it’s often one of the first signs that someone has multiple sclerosis, other conditions can also cause optic neuritis.

Optic neuritis typically occurs in one eye and may cause aching pain with eye movement, dim vision, blurred vision, or loss of color vision. It may also cause complete vision loss in the affected eye. In most cases, vision returns, although it is possible for optic neuritis to occur in the other in the future.

Double vision, diplopia, can also be an early indicator of MS. It occurs when the nerves that control eye movement are inflamed or damaged. The muscles on one side may be weak from nerve damage, causing eye movements to be uncoordinated. This can cause images to appear side by side or on top of each other. Diplopia may be temporary and go away without treatment, or it may persist.

Sexual dysfunction is a common symptom of multiple sclerosis that often goes unreported.

Sexual arousal begins in the central nervous system where the brain sends messages to the sex organs through nerves that run along the spinal cord. If these nerves are damaged by MS, it can directly affect sexual arousal and orgasm. MS symptoms such as fatigue, pain, and spasticity can also cause sexual issues. People with MS may also feel anxious or angry about living with the condition, making it difficult to “get in the mood.”

Impairment in bladder function can affect between 78% to 90% of MS patients, while bowel dysfunction affects about 68% of patients.

MS can affect bladder function by making it more difficult to control the release of urine (called incontinence) or making it more difficult to start urinating (called hesitancy). It can also cause bowel changes such as constipation or involuntary bowel incontinence. MS interrupts the transmission of signal to and from the brain, and it can also disrupt the electrical impulses to the muscles that are involved in emptying your bowel.

If you are experiencing any issues with your breathing, you should see a healthcare provider right away. This can indicate an infection or another serious problem that requires immediate attention.

The most common cause of respiratory issues with MS is a loss of muscle strength and endurance. As the muscles involved in breathing get weaker, it requires more effort to inhale and exhale. If you are already experiencing fatigue due to MS, this can make even the simple act of breathing even more tiring.

If you are having trouble breathing, you may also have trouble with speech and voice production You might find it more difficult to speak loudly enough for other people to hear you, or you may not be able to hold long conversations.

How is MS diagnosed?

If you have early warning signs of MS, you may be concerned that you are at risk for the disease. However, it’s important to keep in mind that many of the symptoms of MS can be attributed to other conditions. Since there isn’t a specific test to definitively diagnose multiple sclerosis, your doctor will rely on taking a thorough medical history and physical examination, and different tests to determine the cause of your symptoms, including:

Depending on your symptoms and medical history, your doctor may order additional tests and analyses to get an accurate diagnosis.

Learn from others with MS

If you are experiencing any warning signs of MS, be sure to talk to your doctor to receive the correct medical diagnosis. If you are diagnosed with MS, you may feel overwhelmed with everything you need to learn to manage your condition. At PatientsLikeMe, there are over 75,000 members who are living with MS. Join them today to learn about how they manage their condition.