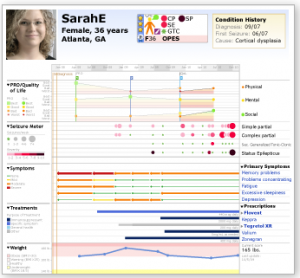 Launched earlier this year, the PatientsLikeMe Epilepsy community now has more than 3,000 patients.  In honor of Epilepsy Awareness Month, here’s a snapshot of what patients like you are sharing and learning about in this community.

What else do you know?  Learn and share with PatientsLikeMe today.

1 thought on “Epilepsy Awareness Month: What do you know about Epilepsy?”