Most people look forward to their first cup of coffee every morning. In fact, 62% of U.S adults drink coffee regularly. The routine of having that first cup; the strong aroma, taste, and the feeling you get when you take the first sip is a moment of peace, celebration and energy all at once.  But after you’ve finished the first cup, and maybe a second, or third, you may start to feel a little jittery, nervous or even irritable.

Caffeine is the psychoactive compound in coffee that affects how we think and feel, physically and emotionally. It’s the most commonly used stimulant that, when consumed in large doses, elevates heart rate and blood pressure, speeds up breathing, and increases feelings of nervousness and irritability.

This fight-or-flight response, also known as an acute stress response, can make anxiety worse and in some cases may even trigger an anxiety attack.

Anxiety disorders are the most common mental illness in the United States, affecting 18.1% of adults every year. While most people experience anxiety at some point in time, like speaking in front of a crowd, the first day at a new job, or driving, not everyone has an anxiety disorder.

Anxiety disorders are a group of conditions that present with persistent, excessive fear or worry for at least six months and interfere with regular activities, like school or work.   Symptoms of anxiety are similar to those you may experience after consuming high levels of caffeine, including:

Caffeinism is a term used to describe chronic anxiety from drinking too much caffeine, and recognize the striking similarities between the effects of caffeine and symptoms of anxiety.

One study examined six people with an anxiety disorder, all of whom saw significant improvements in their anxiety after stopping caffeine. Of the six participants, five of them no longer needed anxiety medication after quitting caffeine. Another participant, who went caffeine free and eliminated anxiety, had caffeine one day and reported experiencing symptoms of anxiety for the following two weeks.

So how does caffeine lead to anxiety? By changing chemical responses in the brain.

Caffeine increases anxiety by affecting our hormones, the chemical messengers secreted into the blood that carry messages to organs and tissues throughout the body.

Caffeine affects the activity of the hypothalamic-pituitary-adrenal (HPA), which links the hypothalamus and pituitary glands in the brain to the adrenal glands in the kidneys. The HPA axis influences the body’s ability to manage and regulate stress by the production of key two hormones: epinephrine (adrenaline) and cortisol. The HPA regulates the production and secretion of both hormones.

In addition to affecting the HPA, caffeine affects the central nervous system (CNS) by blocking adenosine receptors in the brain, the neurotransmitter that controls speed of cell activity. Adenosine’s primary role is to slow cell activity. Under normal conditions, it promotes drowsiness and sleep. Adenosine levels build each hour you are awake, which is why you feel more alert when you first wake up and become more tired throughout the day. Because caffeine attaches to adenosine receptors, cells speed up instead of slowing down.

Caffeine also causes physical changes to other brain receptors that control mood, including GABA and serotonin. GABA is an inhibitory neurotransmitter that helps you relax and serotonin helps to regulate mood and appetite.  Multiple research studies have shown that a deficiency of GABA signaling is directly linked to anxiety disorders, and caffeine disrupts the regular metabolism of GABA.

Combined, these effects on the brain and hormones can also impact sleep quality and duration,  the ability to metabolize certain vitamins and minerals, the digestion process, and the capacity to manage stress. 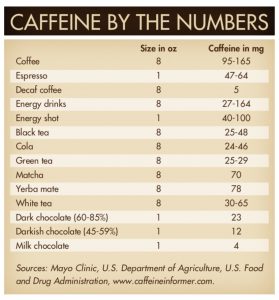 Where is caffeine found and how much caffeine is too much?

Caffeine is naturally found in some fruits, coffee beans, and cacao, and is frequently added to beverages and supplements.

The FDA has cited 400 milligrams (mg) of caffeine a safe amount for healthy adults to consume without experiencing any negative effects, and 200 mg for pregnant or nursing women. However the exact amount will vary person to person based on tolerance, ability to metabolize it, and genetics.

If you start to feel symptomatic and think you may have had a little too much, don’t panic – that will make symptoms worse! Instead, try some deep breathing exercises, go for a walk and drink some water.

Should you give up your morning coffee?

No, you don’t necessarily need to give up your morning cup of joe. But, if you don’t think regular coffee is the right choice for you, and may be increasing your anxiety, there are plenty of other options.

If you love the taste of coffee, decaf coffee or tea is a great substitution for regular coffee. You can also try going coffee free for a few days, then gradually add coffee back into your routine to help raise caffeine tolerance levels. Or save it for the days you really need a boost (we all have them!).

If an energy drink or a soft drink seems to be calling your name in the afternoon, opt for flavored seltzer water instead. Infused waters are another great option, like cucumber and lemon, to help quench your thirst.

Caffeine is found in chocolate too. Instead of reaching for a few chocolates, try a small handful of nuts and fruit. The healthy fats found in nuts will help keep you full and satisfied, while the sweetness of fruit will help curb your sweet tooth.