Meet Cidney, a PatientsLikeMe member with Parkinson’s disease who recently took part in RAGBRAI (The Register’s Annual Great Bicycle Ride Across Iowa). Started in 1973, this annual seven-day bicycle ride is the oldest, largest and longest event of its kind. 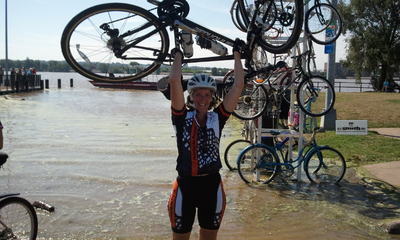 Here’s what Cidney, who lives in Las Vegas, Nevada, says about her experience:

“Well I did it.  Actually I only did half of it (it being RAGBRAI).  The heat was intense so I rode from the halfway point each day.  That was still about 30 to 40 miles each day.  Now I’m a Vegas girl and I know about heat, but I didn’t know much about humidity. Now I do and I’ll take the dry heat in Vegas any day.  But despite the intense heat and HILLS (Iowa is not flat), I had an incredible experience.  I had never done anything like this before, and it was all I had hoped for.

There were 72 people in the Pedaling for Parkinson’s group. Some were elite cyclists, some were recreational cyclists who came to support Parkinson’s research, and six of us were people with Parkinson’s (PWP). I had the opportunity to talk to many people while riding.  We had great jerseys that people noticed and would ask us about our connection to Parkinson’s disease.  Many were shocked when I told them that I had Parkinson’s.

The best part of the week was getting to know the other five PWP.  They are amazing people with courage and determination, and they were just plain fun to hang around with.  Who said PWP can’t have fun?  So it was a week to remember.  There’s something about riding till your muscles ache and sweating till you’re soaked.  I think it’s more of the sense that Parkinson’s may get part of me, but it won’t get the best of me.”

3 thoughts on “Photo of the Week: Pedaling for Parkinson’s”