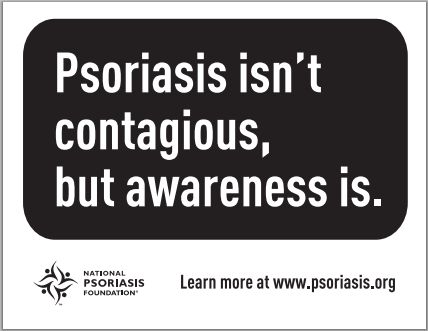 Last week, we told you about the Spotlight on Psoriasis and Psoriatic Arthritis Online Film Festival and how you could participate. But for those of you who don’t have psoriasis and don’t know much about it, we wanted to tell you a little more about this chronic condition as August is Psoriasis Awareness Month.

An autoimmune disease affecting as many as 7.5 million Americans, psoriasis was recently in the headlines when reality star Kim Kardashian was diagnosed with the condition after developing red patches on her legs and torso. As she soon learned from her doctor during an episode of “Keeping Up with the Kardashians,” the disease is a lifelong one, and there is no cure. Her story also demonstrated the tendency for psoriasis to run in families, as her mother Kris Jenner also has the condition.

Like many people, Kardashian’s first reaction to the diagnosis was one of embarrassment and self-consciousness. Many people with psoriasis report that they have limited social activities, dating and the use of public swimming pools due to the often highly visible condition. In fact, a 2009 survey by the National Psoriasis Foundation found that nearly three-fourths of respondents say that psoriasis has had a negative impact on their quality of life.

The goal of Psoriasis Awareness Month is to highlight the life-altering impact of psoriasis and psoriatic arthritis and dispel the many myths surrounding it. With that objective in mind, here are a few quick facts to raise your knowledge.

Did you know that…

One of the best ways to better understand psoriasis is to get to know someone with the condition. Here at PatientsLikeMe, 318 patients report psoriasis, and 176 patients report psoriatic arthritis. Women are disproportionately affected, representing 69% of our psoriasis members and 82% of our psoriatic arthritis members. Across both conditions, one of the most commonly reported treatments is .

Learn more by checking out the profile of one of our psoriasis members today. Also, don’t forget about the Spotlight on Psoriasis and Psoriatic Arthritis Online Film Festival. Starting Tuesday, August 30th, anyone can watch and vote on submitted videos at www.psoriasis.org/pam.

3 thoughts on “What Do You Know About Psoriasis?”