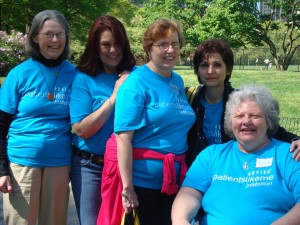 Last weekend, we headed to New York City in great anticipation of the 2010 Parkinson’s Unity Walk held each year in Central Park.  We were excited once again to meet members of Team PatientsLikeMe, a group of patients who travel from across the country to meet one another and work tirelessly to raise money each year for the walk.  Team PatientsLikeMe raised $13,000 and came in as #13 of the Top 25 fundraising teams for the 2010 Unity Walk.

This year, some of the team members were reuniting at the walk after meeting at previous Unity Walks; others were meeting for the very first time.  The experience was inspiring and energizing.  What we were able to see first-hand is how consistently and plentifully patients share – both online and off.  In addition to sharing their health data and lives on PatientsLikeMe, we see how they also share their families, their stories, their dreams of a Parkinson’s-free future, and, at this unforgettable day in Central Park, their unwavering commitment to helping patients just like them.  Representative of the thousands of patients in our communities, members of Team PatientsLikeMe are full of hope and inspiration and plenty of energy.  We chased any person sporting a blue PatientsLikeMeInMotion t-shirt up and down “Find a Cure Boulevard” as they met other patients, registered at information booths, and took in the scene.  It wasn’t always easy to keep up! 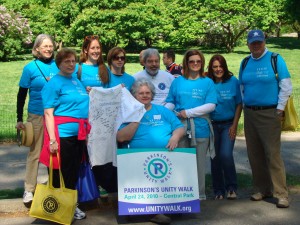 We finally pulled the team together (with the help of Team Captain, Pokietoo) as they posed for a team photo for the Unity Walk staff.  As we do each year, we took the opportunity to get some pictures and video of the team sharing their thoughts about living with Parkinson’s and their experiences on PatientsLikeMe.  Here’s a glimpse of a short video with Pokietoo telling us about the power of the patient voice.  Be sure to also check out this video of members of Team PatientsLikeMe sharing their thoughts about living with Parkinson’s disease.

Thanks to Team PatientsLikeMe for opening your hearts, your arms and your lives for us once again this year.  Thanks to our partners at the Unity Walk for creating such an amazing event for patients and research.  And thanks to all of you who share every day in our communities.  You truly inspire us.

Posted May 7th, 2009 by patientslikeme 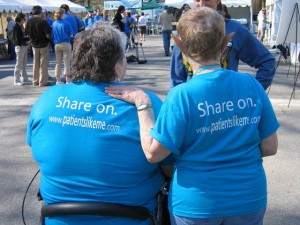 PatientsLikeMe was once again a proud sponsor of the 15th Annual Parkinson’s Unity Walk, held in New York City on Saturday April 25, 2009. On a gorgeous but hot day in Central Park, Jeana Frost, James Kebinger and I (Maureen Oakes) joined thousands of walkers and sponsors in raising more than $1.2 million for Parkinson’s research. As Lori said last year, “Unity” is the perfect word to describe this event. People from all over the world came together for a common cause and the results were staggering!

Getting to meet PatientsLikeMe members in real life is always a treat, and this year we saw old friends and met some new faces too! For me, one of the highlights was getting to see the amazing qui 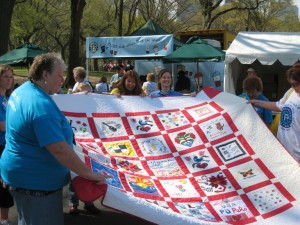 lt made up of squares created by our PD members. Not only is it a stunning piece of craftsmanship, but it represents the spirit of collaboration that is so central to PatientsLikeMe. Members from across the country, many of whom have never met each other, shared their own artistic talents in their individual squares and the final product represents their collective strength, wisdom and passion. It was a great symbol of the power of our PatientsLikeMe community and all their efforts this Parkinson’s Awareness Month.