“The reason I’m interested in Doctors 2.0 is that it’s the intersection between those traditional healthcare establishments and the new cutting edge of the Internet, and I think the people who can bridge those two areas over the next two to three years will be the ones who will be able to empower patients and make a difference on a large scale.”

In June, our R&D Director Dr. Paul Wicks attended the third annual Doctors 2.0 and You conference, an international gathering devoted to the understanding of how physicians are using new technologies, web 2.0 tools and social media.  During the event, which was held in Paris, France, he was asked to give a brief video interview about why he was attending and what he’s been up to lately.  Check it out below.

On a related note, check out our interview with pediatrician Dr. Jim King about how he’s used PatientsLikeMe as part of his practice.

More than five years after founder Jack Dorsey sent the very first “Tweet,” Twitter has exploded into a social media behemoth.  Today, billions of real-time Tweets are sent each year about all manner of subjects – including healthcare.  But how in the world do you keep up with all of them?

That’s exactly the conundrum that the Healthcare Hashtag Project set out to tackle.  By creating a database of relevant hashtags to follow, they aim to “lower the learning curve of Twitter” and make it “more accessible for providers and the healthcare community as a whole.”  Ultimately, they hope this will help those interested in healthcare “find the conversations that are of interest and importance.” 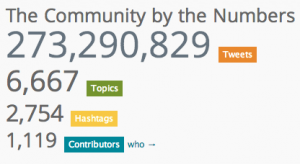 To dip your toes into this geyser of information, check out the project’s up-to-date lists of healthcare hashtags (a topic categorization that begins with “#”), Tweet chats (where a group of people Tweet back and forth at a designated time), conferences and diseases.  Not only can you discover where the interesting conversations are taking place, but you can find out who to follow within your disease area and see what’s happening at related healthcare and scientific conferences.